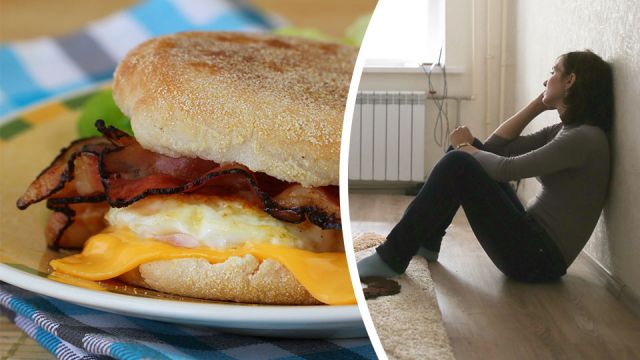 We’ve all felt down in the dumps before. It’s a crummy feeling, and for some, it’s a state-of-mind that can be tough to shake. As stated by the Anxiety and Depression Association of America, major depressive disorder is the leading cause of disability in the United States.

Affecting more than 16.1 million American adults, this disorder is actually more prevalent in women than men. It is characterized by at least five of the diagnostic symptoms, of which at least one is a loss of interest and pleasure in common activities or an overwhelming feeling of sadness.

Being a highly complex disorder, there is not a simple cause-and-effect explanation. Rather, it is believed to be caused by a combination of life stressors, genetic vulnerability, substance use and medical conditions that impact mood regulation.

In recent years, nutrition has been more closely examined — not only concerning the foods that you should be eating on a regular basis but also those you should eliminate from your diet. This is a key area of interest in terms of my background, as I continue to learn more about the relationship between food and mood.

How the foods you eat impact your mood

Just as those with cardiovascular disease focus on a “heart-healthy” diet, if you’re suffering from depression, you too can influence your neurological health.

Although the inner workings of your brain are overwhelming complex, it is well-understood that key neurotransmitters impact everything from appetite to sleep, mood to pain perception. Of these brain chemicals, serotonin is a major player in regards to emotion.

Today, nutrition has become such a key area of interest within the mental health community that it has led to the development of nutritional psychiatry. In one recent study, published in BMC Medicine, 67 subjects were studied, all of which were in psychotherapy and/or taking antidepressants.

All of the subjects were also following unhealthy diets, consuming processed meats, and salty and sweet snacks, along with a low intake of dietary fiber from fruits and vegetables. During this 12-week study, half of the participants switched their diet, focusing on a high intake of fatty fish, grass-fed beef, eggs, fruits, vegetables, seeds, nuts and olive oil.

In comparison, those in the control group (who continued to eat a poor diet while receiving social support) improved by an average of four points. In total, only eight percent were in remission following the study. This means that food may act as a powerful antidepressant while reducing your risk of other major diseases.

Ready to give your own brain a happy boost?

Avoid these three foods to reduce your risk of depression

If you have been eating a poor diet and feel down-in-the-dumps, its time to put that pep back in your step. Avoid these three foods and replace them with plenty of fruits, vegetables, nuts, seeds and wild-caught fish.

The link between sugar and depression is well-established. However, its impact is incredibly complex. Shown to increase inflammation, cause insulin resistance, and promote addictive behaviors, all of these variables can contribute to poor mood.

And, if you opt for artificial sweeteners, know that these products are just as bad — if not worse. Aspartame, for instance, has been linked to a range of cognitive and behavioral symptoms. Not only has it been shown to impact key neurotransmitters, including serotonin and dopamine, but it also acts as a chemical stressor.

When it comes to the category of processed foods, these ingredients are all around us — and they are causing systemic toxicity. From artificial food additives to the increased use of pesticides, these variables impact our neurological and mental health. They cause inflammation and in turn, neurological changes.

Numerous studies have verified this association, as refined grains and added sugar increase your risk of depression. In contrast, other aspects of diet have shown protective effects, including an increased intake of fiber, whole fruits, whole grains and vegetables.

You see the words “Free From Trans Fats” just about everywhere today. Although the relationship between these fats and serious health complications has been known for years, companies continue to sell their products to unsuspecting consumers.

Hydrogenation is simply a process where a liquid fat is turned into a solid fat — most commonly associated with margarine and other spreadable products. High in trans fats, these fats do not respond naturally in the human body. Shown to cause inflammation, disrupt hormone production and reduce serotonin levels, these fats do far more harm than good.

So, before you reach for that next donut, a bag of chips or tub of ice cream, say to yourself, good food = good mood. Change your lifestyle and diet in order to become the happy, vibrant individual you can and deserve to be.