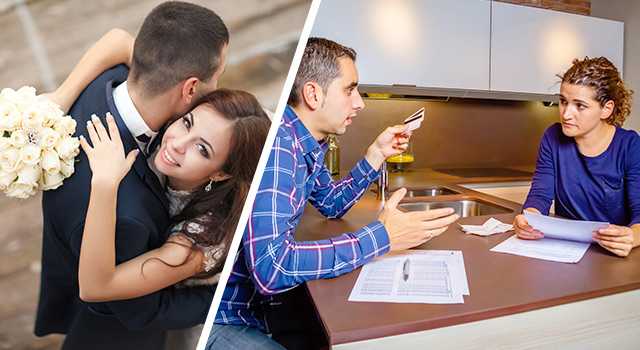 There are many clichés about marriage floating around out there: “Happy wife, happy life,” “like father like son, like mother like daughter,” “the sex ends after the honeymoon,” and my favorite, “the wife is always right.” But seriously, each marriage is unique. And the truth is, until you’ve actually taken that plunge, you won’t really know what to expect. Yet, there are things I wish I had known before I got married (and whether I would have believed them is another story). So, if you’re thinking about tying the knot, here are six things to mull over before you walk down the aisle.

You marry the whole family

For those who think you don’t marry the family, think again. Marriage involves so much more than just the bride and groom. Once you’re married, his or her family become your family, whether you like it or not. When you’re dating, especially at the early stages, everyone is on their best behavior. You may live away from in-laws, so they don’t seem like such a big deal in your life. But once you’re married, all that changes.

Some people don’t realize the pull family can have on a person, which often becomes painfully clear during the wedding planning stages. I wanted a small and intimate wedding, but quickly gave into my in-law’s demands for a large wedding, which kept us in debt for almost five years post-wedding. Suddenly, there were expectations on where we lived, when we’d have children, how we’d spend our weekends and on and on. Luckily, my husband and I were always on the same page and quickly established clear boundaries with extended family.

My friend separated three months after the honeymoon, when she realized she couldn’t stand his family or the pull his mother had on her husband. All signs, pre-marriage, pointed to controlling in-laws, but somehow, she thought that would all change once he put a ring on her finger.

Try to be friendly and get along with your in-laws as much as possible. You don’t have to be best friends, but it will be so much easier in the long run. However, make sure that you and your husband are on the same page when it comes to in-law involvement. If they become overbearing, set boundaries and stick to them. If not, you will quickly begin to resent them and even your spouse.

Before you marry, you’ll hear repeatedly, marriage is a 50/50 deal. I’ve always taken this to mean that both partners should contribute and give equally of their time and efforts towards the marriage. In reality, though, this actually requires more of a 100 percent investment from both partners. But here’s the thing; neither you nor your partner is perfect and some days 50/50 can feel more like 80/20. At times, you may feel as if you’re giving more than you’re getting and vice versa. A strong marriage sometimes requires putting your ego aside and being totally selfless for the betterment of the marriage.

There will be fighting

What will you fight about? You’ll fight about what you’ve always fought about. Don’t expect whatever unresolved fights you had going into the marriage will magically go away. They won’t, and if anything, they will become magnified. Expect that there will be fights, but expect to fight fair.

One of the biggest issues I’ve had is discounting how my husband feels regarding situations. As wrong as I may think he or she is, it’s not fair to tell a person what they should or shouldn’t feel. Dr. Gail Gross, human behavior expert says, “Don’t tell your mate how he or she feels.” Instead, “Listen, and let your mate tell you what is on his or her mind.” Don’t project your feelings onto your partner. This, says Gross, only leads to fighting battles that don’t exist.

I think that people often go into a marriage believing that certain quirks or habits will ultimately change just because they’ve walked down the aisle. But, being married won’t stop him from disliking all if your friends, or her from paying more attention to Facebook than you. In fact, some behaviors may even be an addiction, and marriage certainly won’t change those.

I can’t help but look at another friend’s marriage that ultimately failed, because she thought she could turn him into a “more sociable and likable” person once they were married. Yikes! Take a good look at your boyfriend or girlfriend’s quirky behaviors before you’re married and don’t overlook them because you’re “head-in-the-clouds” in love. Those quirks and habits will only increase once you’re married.

Don’t lose sight of who you are

Marriage is about partnership, but that doesn’t mean losing sight of who you are as an individual. When you lose sight of what you want and start putting your partner’s needs and ambitions before your own, you’ll only grow to resent him or her. You should be on the same page when it comes to life’s big decisions — like children — but you can still have a great relationship with differing goals.

Organize your financial goals before you tie the knot

Experts agree that coming clean about your financial situation to your significant other is a must before tying the knot. Yes, it can be uncomfortable. But still, it’s absolutely necessary. Talk about outstanding debts and loans, financial assets or obligations, suggests financial writer Jennifer Ryan Woods for Forbes Investing. Your financial life will rear its head over and over again, which makes sense since this phase of your life involves planning for a home, maybe children, travel, vacation homes and even retirement.

In addition, don’t wait until after you’re married to develop a budget. Discuss financial plans right after you get engaged so that you’re on the same page. If you’re not on the same page financially, then this could be a warning flag. Many couples cite financial woes as a major stressor on their relationship.

Some people tend to believe that marriage is the answer to all their problems — it’s not. A road paved with unrealistic expectations can be bumpy. Yes, marriage can be hard, but it can also be exciting, nurturing and loving if cultivated correctly.