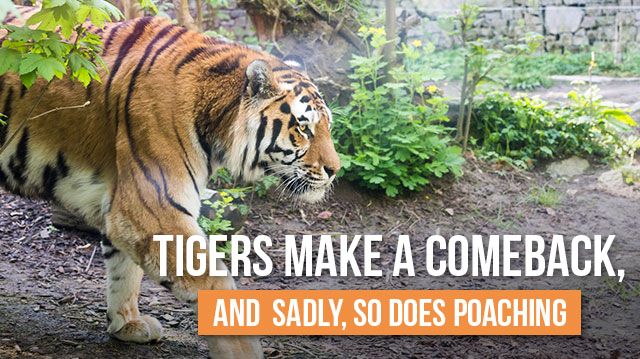 There was some good news for tigers and conservationists recently: Tiger populations are now as high as 3,890, up from the previous estimate in 2010 of around 3,200 globally.  This does not necessarily mean there are more tigers; we might just have gotten better at counting them. Still, the increased population estimates should be seen as a positive trend for an endangered species that hasn’t seen population growth in more than a century.

Why tiger counts are falling

Global tiger populations were estimated to be as high as 100,000 at the start of the 20th century, but these numbers have fallen dramatically on habitat loss and poaching.  It has been estimated that tigers lost 93% of their historical range due to habitat destruction and 41% of their range since previous estimates were made in the mid-1990s.

Unfortunately, 2016 also has seen a dramatic rise in the number of tigers killed by poachers, with tiger-poaching in India having already surpassed the total for all of 2015.  At last count 28 tigers had been killed by poachers this year in the country to date; just 25 were killed all of last year.

More than just one tiger is impacted by a single act of poaching, according to the World Wildlife Fund.  When an adult female tiger is poached, cubs go without a parent.  If it is a male tiger poached, that reduces the breeding abilities of the population as the other males compete for the poached male’s territory.

Habitat loss also plays a role in poaching, too. Corridors between tiger habitats are not preserved, leading to inbreeding among remaining tiger populations, making them in turn weaker and more vulnerable to poachers.

A plan to bring tigers back

In response to the fall of tiger populations, 13 tiger-bearing countries created the Global Tiger Recovery Plan in 2010, with the goal of doubling the global population of the big cat by the 2020.

The plan outlined key strategies to increase the tiger population including:

Six years into the program and there appears to be signs of progress.  According to the recent census, tiger populations have grown in four countries: Russia, Nepal, Bhutan and India, the country that provides habitat for 70% of the global tiger population.

Despite positive overall population growth trends, the rise in poaching numbers in India is something conservationists have termed “worrying.” A possible reason for the recent increase in tiger-poaching, could be a resurgence of traditional Chinese medicine, which holds all parts of the tiger as having medicinal value.

It is believed that more than 60% of China’s population uses traditional Chinese medicine. Some tiger parts have many of the same properties as over-the-counter anti-inflammatory medications such as aspirin. Yet many other conditions, ranging from malaria to laziness, are treated using various tiger-derived products sold through illegal markets, to little or no effect beyond a placebo.

Many Chinese believe tigers are have medicinal power due to their strength. Depictions of tigers often convey an almost mythical power, strengthening many people’s belief that their bodies hold curative properties.

Last year, the story of Cecil the Lion and subsequent response online demonstrated that humans have the capability to place great intrinsic value on the life of big, wild cats.  The story of an American dentist illegally poaching a lion for sport was met with outrage and caused the offender to have to leave his dentistry practice for six weeks to avoid the backlash.

If it is true that much of the belief in the healing properties of tiger parts comes from the respect that many hold for the tiger, then possibly the cure for poaching would be the placing of a social stigma on those who purchase tiger parts through the black market.  This could perhaps be done in a way not unlike the social stigma that was placed on the trophy-hunting dentist last year.

If the tiger is to be put on a pedestal as a symbol of strength and power, then why is it that endangering the existence of that very same animal through supporting illegal poaching isn’t met with condemnation? Perhaps that shift in thinking is needed for tiger populations to truly recover.