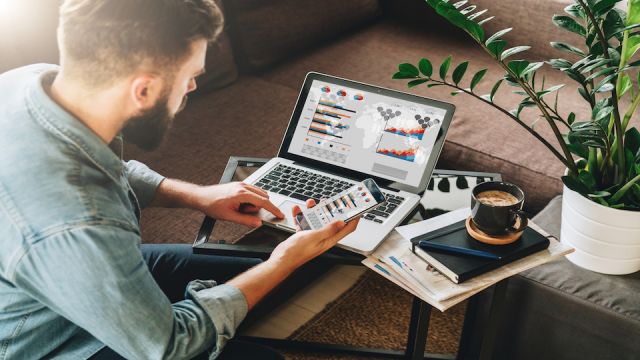 Do you work all day on a computer or spend more time than you should on your phone, tablet or in front of the television? We live in a digital age, and more people spend long hours in front of a screen of some sort. What is happening to our eyes and brains as a result of too much screen time? The answer may scare you!

According to the American Optometric Association (AOA), the average American workers spend a minimum of seven hours each day on the computer at work or at home. There are other reports that take this number up to eleven hours including time spent at work and home on any type of electronic device.

Eye strain from extended periods in front of a screen can cause eye irritation, dryness, fatigue, and blurred vision. According to a new report, these types of problems are on the rise. According to Dr. Christopher Starr, an associate professor of ophthalmology at Weill Cornell Medical College in New York,

“Some of us are using these things for up to nine hours a day. Your eye muscles have to focus at that near range and that can be fatiguing.”

Dryness is caused by a lack of blinking that happens when you stare at a screen. We normally blink about 15-20 times per minute. This can be reduced by half when your eyes are fixed on a screen. Not blinking causes tears in your eyes to evaporate quickly and this can cause blurred vision, redness, and pain that gets worse the longer you stare at the screen.

Computer Vision Syndrome ( CVS) is also known as Digital Eye Strain and is used to describe a group of eye and vision-related problems that happen after prolonged computer, tablet, and phone use.

Some common symptoms associated with CVS include:

Over time, conditions such as macular degeneration and even vision loss can occur.

Research reveals that too much screen time has both behavioral as well as structural impacts on the brain.  Studies show that excessive time spent on cellphones has been connected to anxiety, stress and even depression. Scientists call this ‘digital dementia” and say that too much screen time is harming functions in the right brain including short-term memory, concentration, and attention. Sadly, it is not known if this damage is reversible.

It’s all about the blue light

We receive small amounts of high-energy blue light waves when we are exposed to the sun, but large amounts from electronic devices including televisions, computers, phones, and tablets.

Our cornea and lens in our eyes can block out other UV rays, but almost all blue light passes right through to the retina which is very sensitive to light. Too much nighttime exposure to screens can also cause a mixup in our circadian rhythm by altering melatonin production.

Nutrients that help protect your eyes and brain

While reducing screen time can help tremendously with a reduction in symptoms associated with excessive blue-light exposure, you can also protect your eyes and your brain by eating certain nutrients.

Colorful fruits and veggies contain three specific carotenoids that can protect your eyes:

These compounds are most beneficial because they cross the blood-retinal barrier. Both zeaxthanin and lutein are found in high concentrations in the macula of the eye which allows them to block blue light from impacting highly sensitive parts of the eye like the retina. Research shows that these nutrients can improve headache, fatigue and sleep problems associated with too much screen time.

What you should be eating

To protect your brain and cognitive function there are a number of nutrients to consider. Here are three amazing brain foods that you can eat!

Fatty fish: Fatty fish including salmon, trout, and sardines top the list. These fish contain a healthy dose of omega-3 which is incredibly good for brain function. Over 60% of the brain is comprised of fat and half of this is the omega-3 type which makes fatty fish an excellent choice for brain health. In addition, omega-3 has been found to slow down mental decline associated with age and protect against Alzheimer’s. One study even found that people who ate baked or broiled fish regularly had more gray matter in their brains. Gray matter is important because it contains most of the nerve cells that control decision making, emotion, and memory.

Blueberries: Blueberries contain a type of plant compound (anthocyanins) that has both an antioxidant and an anti-inflammatory effect. Antioxidants protect against oxidative stress and inflammatory conditions that may contribute to aging in the brain and neurodegenerative diseases.  Blueberries contain certain antioxidants that build up in the brain and improve communication between brain cells. Studies in animals show that blueberries improve memory and may even help to keep short term memory loss at bay.

Nuts: According to research, eating nuts can improve heart health and brain health. One study found that women who ate nuts on a regular basis for several years had better memory compared to those who did not eat nuts. A 2014 review showed that nuts can also improve cognition and help to prevent neurodegenerative diseases. Nutrients in nuts including healthy fats, antioxidants, and vitamin E help to give them their solid brain-health benefits.