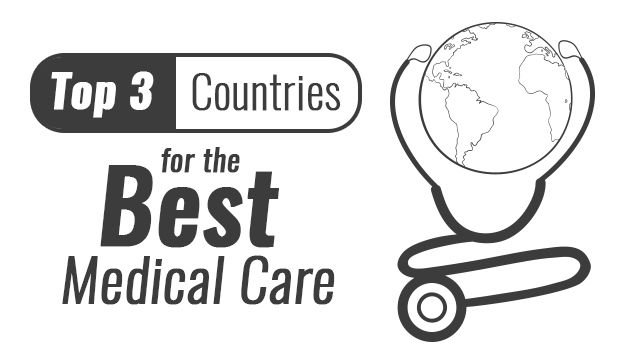 In the year 2000, the World Health Organization performed its first ever in-depth global healthcare system analysis. WHO used five indicators assess quality of health services in each of the 191 participating nations. Those indicators were: overall level of population health; health inequalities; health system responsiveness; how well people of varying economic statuses are served; and who pays the costs.

Perhaps surprisingly, the United States ranked relatively low, at number 37, right behind Costa Rica and Dominica. This despite the fact that America spends a higher percentage of its gross domestic product on healthcare than any other nation.

America claims to be one of the most advanced and free nations in the world, so the low ranking of our country’s healthcare system begs the question “What are other countries doing better?” It also forces us to ask how America’s healthcare funds could be better spent.

Let’s take a look at the three countries with the top medical care systems in the world to discover what constitutes a successful healthcare system.

Ranking as the world’s best medical care system, 77 percent of France’s health expenditures are funded by governmental institutions. While the system is a mix of public and privatized healthcare, the nation reimburses an average of 70 percent of its population’s acute out-of-pocket healthcare costs and 100 percent of long-term or costly medical bills. Citizens must pay compulsory health insurance fees equaling 5 percent of earned income, automatically deducted from their paychecks.

The country’s two-tiered universal healthcare system was found to have the highest rate of availability, meaning that doctors were readily accessible when needed. It was also rated as the best overall organization of healthcare providers in the world. Patients are treated quickly and efficiently and the nation sees high patient satisfaction and a low overall mortality rate. France also has a very high doctor-to-patient ratio, which means that people can pick and choose which doctors they want to see rather than being assigned a physician.

In this Mediterranean country, healthcare is free. Italians pay an average income tax of 50%, part of which pay for medical coverage. Still, there is a privatized aspect to the healthcare system, as citizens can choose to pay for private care in order to be seen more quickly for a specialty appointment.

Even with the privatized option, the Italian government reimburses patients for the amount one would have paid for the same service publicly, making out-of-pocket medical expenses relatively low. These visits are also made free for the poor if referred by a government-funded family doctor. Surgeries and extended hospital stays are completely free, regardless of income.

Overall, Italy has one of the world’s highest life-expectancy rates and a very high doctor-to-patient ratio. Other than its optimal medical system, doctors and health experts attribute Italy’s overall high quality of health to its Mediterranean diet high in healthy fats and low in processed foods.

A far less known country, this European nation of 31,000 people offers free state-funded healthcare to its citizens. Every San Marino resident is entitled to equal care, regardless of income. The state completely covers most medical services without copays, including childbirth, hospitalization and visits to specialist doctors. There also is the option to be seen privately for a cost in order to avoid the waiting times associated with state-run practices.

San Marino has a higher life expectancy than most other countries in the world and they are advocates for raising awareness about people with disabilities, including an initiative to include persons with disabilities into all aspects of life within their small nation. In nation so small, there is only need for one hospital, known for its extremely high quality medical staff and care.

Ultimately, it seems that a combination of both universal, public access to free healthcare with the option to pay for private care is the optimal equation for a successful medical care system. Ensuring that every citizen has an equal right to access quality care is a necessity for a healthy nation. Having a high doctor-to-patient ratio is another underlying factor consistent throughout the world’s top-rated medical systems.

In comparison, America has the costliest healthcare system in the world and came in at number 32 for doctor-to-patient ratio.

So, how can America do better? Do you see a true, two-tiered medical system working in the United States? Would you be willing to pay higher taxes to improve America’s healthcare system?