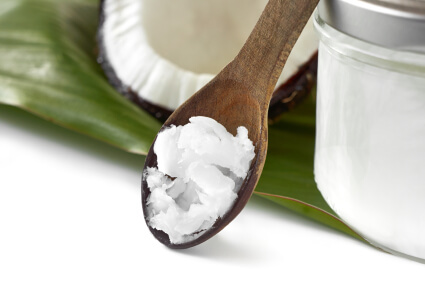 While you may be convinced that coconut oil is a fad, it is a fad that has benefited people around the world for thousands of years, and one we feel is well worth exploring. Lauric acid has a long history of use in fighting pathogens, backed by research that is over 50 years. Coconut oil is the richest source of lauric acid on the planet.

There are numerous peer-reviewed studies noting the health benefits of one of nature’s most valuable gifts. If, after you read this article, you are still inclined to think that coconut oil is just a passing fad, we encourage you to try it – we believe you will become convinced of its value, as well.

The fact that most of our skin care products in this country are made from polyunsaturated oils explains why we, as a nation, suffer from so many skin complications. There is a great body of growing evidence to support the fact that topical application of coconut oil as well as consumption are highly beneficial.

Coconut oil is natural, and that means that not many people want to conduct extensive research into its benefits. However, a study conducted in 2008 at the Skin and Cancer Foundation in the Philippines, compared virgin coconut oil and virgin olive oil in moisturizing dryness and removing bacteria from colonized Atopic dermatitis skin.

The study, a double-blind controlled trial, found that coconut oil was more effective than olive oil in killing bacteria, mostly because of its lauric acid content.

A 2009 study at the Division of Dermatology, Department of Medicine, University of California, San Diego, looked at the antimicrobial properties of lauric acid and its potential to heal acne. The results were favorable for using lauric acid in place of antibiotics for treatment of acne.

If you have ever known a Filipino person, you know that they likely have a lovely, youthful complexion and soft, wrinkle-free skin, despite the fact that they live in a climate that exposes them to the sun’s hot rays all year round. Skin cancer is virtually unheard of in the Philippines, where coconut oil is the main dietary oil used and the main ingredient in all of their skin care products.

In the United States, we run scared from the sun, covering every square inch of exposed skin with lotions, lathers and sprays thinking that we are doing the right thing to protect ourselves from the damaging rays of the scorching sun. We are constantly bombarded with reasons why we need to use sunscreen, which blocks out the skin’s ability to absorb vitamin D. Interestingly enough, vitamin D has been proven to prevent cancer.

Coconut oil is the main reason why people in the tropics can be in the sun and not experience skin cancer. Its healing antioxidant powers protect the skin from free radical damage. In addition, using coconut oil on the skin helps our bodies absorb other nutrients more effectively, such as vitamin E, which is another skin protecting antioxidant.

Now, don’t think that you can be crazy and lay in the sun all day, even with coconut oil on your skin. You still have to be smart about the sun. Stay clear of the sun during the hottest time of the day between noon and 3pm, if possible. Vitamin D production is important, but it only takes a little while per day in the sun to get what you need.

The evidence that commercial sunscreen does more harm than good is very compelling. Sunscreen contains dangerous chemicals that keep the skin from breathing, and blocks beneficial sun rays. The false security that this multi-million dollar business provides is horrifying. Why not switch to an all natural, safe and effective alternative?