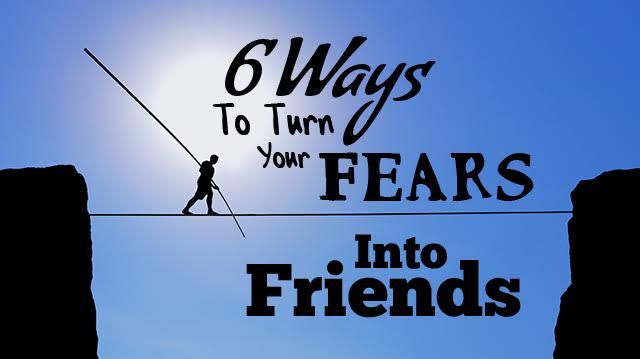 President Franklin D. Roosevelt told the nation in the depths of the Great Depression, “The only thing we have to fear is fear itself.” While people remember these famous words, they often don’t recall what he said next: “— nameless, unreasoning, unjustified terror which paralyzes needed efforts to convert retreat into advance.” Note the interesting use of the word “paralyzes.” When FDR was paralyzed from polio at the age of 39, his life changed irrevocably. He must have been terrified — but he overcame those fears and became one of our nation’s greatest leaders.

Mind-body connection
Anxiety starts in your brain, but affects your entire body. When you’re anxious, your heart races, your stomach flutters, and you might feel your blood pressure rise. You lose the ability to think straight and truly assess a situation. Relieve some of your fears by maintaining a healthy lifestyle. Eat nutritionally sound foods, exercise, and get as much rest as possible. Helping your body won’t necessarily alleviate all of your anxiety, but it is a step in the right direction. Avoid alcohol, opiates and other forms of numbing yourself. They may quell your fears for a short time, but only make things worse in the long run.

Name your fears
What is it that you are afraid of? Failure, romance, finances and health — these are common anxiety triggers, but there are a host of others. If you name your fears, it gives you the opportunity to confront them. You may realize that some of your fears are groundless, but that doesn’t make them vanish. Think about why you are afraid, what is the worst-case scenario, and how likely any of these issues are to actually occur. You’ll get a better perspective on your state of mind.

Practice meditation
Meditation can help manage your fears. If you’re unable to sleep, use the time to meditate instead. Those panicky moments and bad thoughts will come, but over time, they’ll lessen in severity. Eventually, sleep is less of a struggle.

Banish negativity
Get rid of the influences in your life that feed your fears. If there are toxic people around you, avoid them. As the old song goes: “Accentuate the positive, eliminate the negative, latch on to the affirmative, don’t mess with Mister In-Between.” That song was a hit in 1944, when the world was at war. Seventy-two years later, it’s still good advice.

Give yourself time
There’s a reason older people are generally calmer than younger folks. Experience shows them that life has an odd way of working out. People have a fear of failure if they haven’t reached specific goals by a certain age. That might be career, marriage, children — it’s another long list. Reduce your anxiety by “going with the flow.” That doesn’t mean you give up your goals, but realize that things happen when they are supposed to, not when you want them. If you fight the flow, you are only fighting yourself. Allow yourself to enjoy the ride, and remember there’s a reason that patience is a virtue.

Envy is poison
Envy and jealousy are often used interchangeably, but the latter has a sexual connotation. Comparing yourself to others in your peer group and finding yourself wanting is a great cause of anxiety, but resist it. You can’t really know the true interior life of another. Friends and acquaintances may not realize you’re anxious, unless you tell them. The people you envy may suffer more anxiety than you do. Conquer envy and anxiety, and make the best life possible for yourself. In the end, it is never the material things that count, but the kindness and joy you bring to others.

Reward yourself
When you’ve successfully faced a fear, give yourself a reward. It doesn’t have to be a major indulgence, just an acknowledgment that you’ve tackled a fear and won. More victories lie in the future.