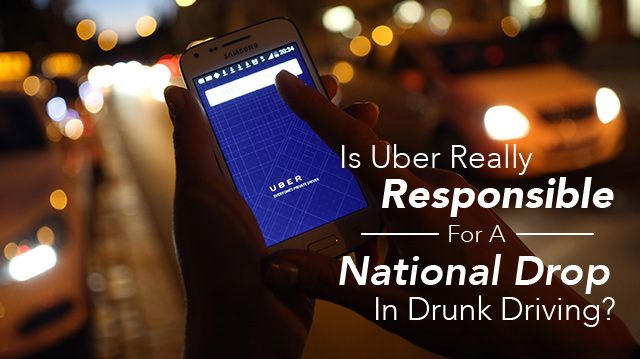 New research suggests ride-sharing taxi alternative Uber is responsible for a reduction in drunk-driving deaths and accidents across the United States. That would be great, but hold on — the data so far struggles to show a direct connection between Uber usage to a drop in people driving under the influence, though more independent studies are likely.

A January 2015 study, “Making Our Roads Safer—For Everyone,” released by Uber and Mothers Against Drunk Driving (MADD) reported that ridesharing is having an impact because it offers people alternatives to driving after they’ve consumed alcohol. In Pittsburgh, for example, requests for Uber rise about the same time bars close, and in Miami people riding Uber spikes in the same hour that has traditionally been the highest for inebriated drivers. In Chicago, researchers found that on New Year’s Eve 2014, three-fourths of Uber requests were made within an eighth of a mile of businesses with liquor licenses.

“In California, Uber’s home state and largest market, drunk-driving crashes fell by 60 per month among drivers under 30 in the markets where Uber operates following the launch of UberX. That’s an estimated total of 1,800 crashes prevented since July 2012,” the report states.

How can they prove that? It would stand to reason that people who know they are going to drink might choose to use Uber instead. A drunk driving conviction carries an estimated $10,000 in fines, legal fees and probation costs, not to mention the risk of killing someone or yourself. Yet Uber is not free; it simply won’t appeal to drivers who do not have the money, funds available on a credit or debit card that the Uber app requires or a smartphone.

By its own admission, caution should be taken when connecting the Uber-MADD study to a reduction in drunken driving. “Nobody is saying that there is a causation relationship here,” Amy George, senior vice president of marketing and communications for MADD, said in an interview with ProPublica, “this is a correlation relationship. Purely correlational.”

The Centers for Disease Control and Prevention, meanwhile, reports a nationwide dip in traffic accident fatalities with at least one driver under the influence of alcohol or drugs. According to the CDC, in 2009 about 29 people died in fatal accidents related to alcohol or drugs each day, compared to an estimated 27 people per day in 2013. If that data remained constant each year, it would indicate a significant decline in annual DUI-related incidents around the nation.

The CDC also reports about a 30 percent decrease in self-reported impaired motorists between 2006 and 2010.

Certainly, Uber — a company valued at more than $40 billion — is an immensely popular service that is being used in more than 250 American cities and more than 50 countries. In August, professors at Philadelphia’s Temple University drew a similar conclusion when analyzing data on alcohol-related driving mortality rates in California from 2009 to 2014, reporting that the death rate dropped up to 5.6 percent in cities where Uber ridesharing service was available.

Professors Brad Greenwood and Sunil Wattal reviewed quarterly changes in vehicular homicides in California cities where Uber is available compared to ones without Uber. They found the ridesharing service decreased fatalities by a minimum of 3.6 percent. Using that data nationally, they believe about 500 lives would be spared annually and the $37 billion spent on medical care for injuries, prosecution and incarceration for drunk drivers could be reduced. Annually, 13,000 Americans are killed in such accidents.

Greenwood acknowledged he was inspired to start the project — which was not affiliated with Uber — after attending a wedding, having too much to drink and using the Uber X service to get home.

The Temple study found the UberX service greatly reduced alcohol-related motor vehicle deaths; however, nine to 15 months pass before the effect is noticed. Greenwood and Wattal also found the effect is greatly reduced during peak times when rates surge, such as on weekends and holidays, because fewer people use the service when the price jumps during peak times. (Surge pricing is supposed to motivate more drivers to log on, thus reducing prices in real time.) When it comes to Uber Black, the upscale service, results were similar only in cities with more than 250,000 in population.

Nevertheless, the studies are great PR for Uber, which has been strongly criticized since its inception six years ago for everything from damaging the taxi industry and failing to unionize to allegations that its drivers have raped and kidnapped passengers in cities such as Berlin, New Delhi, and Toronto. The company has spent hefty amounts in court battles, and has been banned or restricted in some places such as South Korea. In Cape Town, South Africa, traffic police impounded 34 Uber vehicles for illegally operating, forcing Uber to buy commercial licenses there.

Then there’s the case of an Uber driver who in February was arrested in Southern California for driving drunk after the Super Bowl after he had picked up several passengers, and was on his way to pick up more. The driver, Robert Wing, told an officer he had watched the Super Bowl at a bar, and later decided to make some extra money. The Los Angeles Times reported that two empty beer cans were found in the vehicle, including a Coors Light can found under the front seat. Police said his blood-alcohol level was 0.25 percent, more than three times California’s legal limit of 0.08 percent.

Uber provides a useful service and alternative transportation; especially in places where taxi service is costly and not readily available. A reduction in drunk driving incidents would be a victory for everyone on the road, and for the thousands of families who lose loved ones due to alcohol-related accidents each year. It’s just that Uber hasn’t yet done a convincing job yet in linking its service to the decline in drunk driving arrests and fatalities.