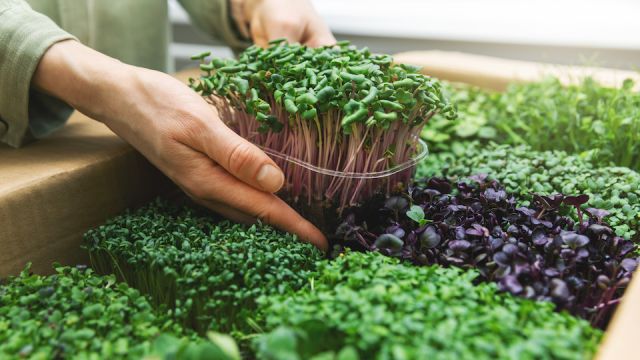 What better time is there than now to start growing your very own microgreens? Microgreens were first introduced in California restaurants in the 1980s and have exploded in popularity since this time. Also known as micro herbs or vegetable confetti, microgreens may be small but offer a massive nutritional punch that is often more powerful than their mature vegetable greens. They are easy to grow, quick to harvest, and a perfect way to keep your body nourished and your energy levels high.

Microgreens are baby plants that are somewhere between a sprout and a baby green. They come in a variety of flavors, colors, and textures and reach about 1-3 inches when mature. It is important, however, not to confuse microgreens with sprouts, which do not have leaves. Sprouts have a growing cycle of about 2-7 days, and microgreens are generally ready to be harvested between 7-21 days after germination – once the plant’s first true leaves have emerged. Like baby greens, the stem and leaves of microgreens are edible, but unlike baby greens, they are quite a bit smaller in size and can be purchased whole and cut at home. Thus, keeping them alive until they are eaten.

Microgreens are so easy to grow that anyone can do it, and they can be grown in a number of places such as outdoors, in a greenhouse, or even in a sunny windowsill.

Scientifically proven to be loaded with nutrients

A study conducted by researchers at the U.S. Department of Agriculture (USDA) and the University of Maryland, College Park, discovered scientific evidence of the high concentration of nutrients in microgreens.

For purposes of the study, the researchers evaluated nutrient concentrations in 25 types of microgreens for the presence of four groups of vitamins and other phytochemicals. Findings showed conclusively that the leaves of microgreens contained between four and six times the amounts of nutrients compared to the mature versions of the same plants. There was some variety between which leaves held the highest concentrations of which vitamins.

According to study author Gene Lester, a researcher with the USDA, the finds of the study “totally knocked me over.” In discussing the findings, he added that they “give us a new insight into plants, because these are little tiny seeds barely exposed to much light at all, and yet those compounds are there ready to go.”

Most microgreen varieties are also rich in potassium, iron, zinc, and copper. Microgreens are also a fabulous source of beneficial plant compounds, including antioxidants. As mentioned earlier, the nutritional punch in microgreens is highly concentrated, meaning that many microgreens contain a higher vitamin, mineral, and antioxidant level than the same amount of mature greens. There is some evidence that when comparing microgreens with mature greens, the nutrient levels in the microgreens can be up to 9 times higher than those found in mature greens. Not only that, but research also shows that they contain a wider variety of polyphenols and other antioxidants than fully developed greens.

There is strong evidence that consuming vegetables is linked to a reduced risk of many diseases, including cardiovascular disease, diabetes, and cancer. Researchers credit the high amounts of vitamins, minerals, and beneficial plant compounds that vegetables contain.

Microgreens contain similar and higher levels of nutrients than mature greens and can play a role in reducing the risk of the following diseases:

The most popular types of microgreens are produced using seeds from these plant families.

Cereal grains, including rice, oats, wheat, corn, and barley along with chickpeas, beans, and lentils, are also sometimes grown as microgreens. The taste of microgreens can vary from rather plain to spicy, slightly sour, or even bitter, depending on the type. Microgreen’s flavor would be described as strong and concentrated.

Growing your own microgreens is easy

All you need to start growing your own nutritious microgreens garden is a small container with drainage holes, like a nursery flat. Line the bottom of the container with approximately two inches of organic potting mix. Use a piece of cardboard or a similar item to create a flat surface on the soil.

Sprinkle your microgreen seeds across the top of the soil and use the cardboard piece to gently push them down into the soil. You can use seed mixes or grow a single crop of microgreens in the container. Good types can be found at places like Renne’s Garden, a reputable online seed dealer or similar online marketplaces.

Use a wire-mesh sieve and sift a small layer of soil over the top of the seeds. Place the container in a drip tray and gently water the soil. Be sure to have the container placed where it will receive a lot of direct sunshine. The soil should always be moist but not soggy. The seeds should begin to grow within seven days.

To harvest your microgreens, simply cut them off above the surface of the soil once the leaves have opened. They are usually ready for harvesting within seven and 14 days.

It’s never too late to adopt healthy lifestyle changes. Look around your home for a perfect spot to start growing your own microgreens.

How to use microgreens

I love to top salads, sandwiches, and soups with microgreens. They also taste great on pasta, in smoothies, juices, and egg dishes. The sky’s the limit when it comes to microgreens, which are also tasty just to eat on their own.

Are you ready to grow this super green?