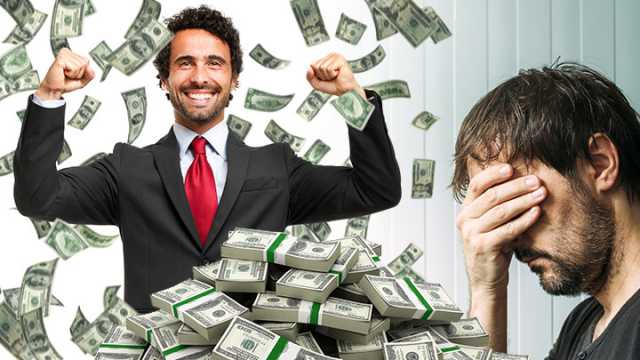 “Money Can’t Buy You Love,” as a classic Beatles song puts it. Nevertheless, most people assume piles of cash can buy you happiness.

Interestingly, however, getting rich suddenly from games like Powerball is often a recipe for both personal and financial ruin. How can winning the lottery end up being one of the worst things that can happen to you? A quick look at some unlucky lotto “winners” can teach the rest of us a few important lessons about money.

From riches to rags

According to the National Endowment for Financial Education, about 70 percent of those who receive a sudden financial windfall will end up blowing it within just a few years. Individuals who win giant jackpots appear to fare the worst. As the financial consultant and author Don McNay explains, “It’s just upheaval that they’re not ready for. It’s the curse of the lottery because it made their lives worse instead of improving them.”

Of course, most people who win the lottery presume that their sudden good fortune will transform their lives for the better. All too often, however, just the opposite happens. Divorce, suicide, tragic deaths and even bankruptcy are surprisingly common as the following infamous stories illustrate:

In 2006, a 47-year-old Florida laborer named Abraham Shakespeare won a $30 million lotto prize. He was soon accosted by friends, acquaintances and hangers-on who wanted a share of his money. For instance, he was sued by a former friend (who insisted Shakespeare stole the winning lottery ticket from his wallet) though the case was dismissed.

Ultimately, however, Shakespeare was murdered by his romantic partner, a woman named DeeDee Moore. Sadly, before his death, Shakespeare told his few remaining confidants that “I’d have been better off broke. I thought all these people were my friends, but then I realized all they want is just money.”

Sandra Hayes and a dozen co-workers split a $224 million jackpot in 2006. The retired social worker, however, believes that her sudden wealth transformed her relationships with friends and family, but not for the better. As she explained in 2012 interview with the AP, “I had to endure the greed and the need that people have, trying to get you to release your money to them. That caused a lot of emotional pain. These are people who you’ve loved deep down, and they’re turning into vampires trying to suck the life out of me.”

In 2002, Jack Whittaker won a $315 million prize. Ironically, the West Virginian man was already a millionaire from heading a successful construction company. Within four years of his Powerball win, however, Whittaker was broke. His riches to rags story included a fair amount of tragedy, heartbreak and misfortune too. For example, both his daughter and his granddaughter died of drug overdoses. In addition, Whittaker was robbed of $545,000 while visiting a strip club.

Lessons we can all learn from unhappy lottery winners

Not everyone who wins the lottery is destined for misfortune. However, there are important lessons to be learned from unhappy lottery winners about how — and how not to — handle money.

1. Money is not the root of all evil, but the love of money does seem to be the source of many sorrows

Unfortunately, money can be like a drug for most people. The more a person has, the more they want. In fact, scientists have designed some interesting experiments, which show that just handling money seems to have an analgesic effect.

As one researcher, Xinyue Zhou puts it, “We think money works as a substitute for another pain buffer — love.” The problem, of course, is that money is a poor substitute for the things that will truly cushion you against the blows that life metes out. Put simply, genuine friends, strong family ties and supportive social relationship are what help people get through tough times. When people start to value money more than their relationships, then suffering seems to follow.

2. Money is just a means, not an end in itself

Money has become something of a measuring stick in our culture. But this kind of thinking can encourage us to value rap stars more than teachers. A little more focus on the benefits a person contributes to society rather than the size of their paycheck would be a step in the right direction. As one anonymous person wisely put it: “The real measure of your wealth is how much you’d be worth if you lost all your money.”

3. Keeping up with the Joneses is a recipe for unhappiness

The enlightenment philosopher Edmund Burke once said, “If we command our wealth, we shall be rich and free. If our wealth commands us, we are poor indeed.” Too often, the desire to acquire more and more and to keep up with the Joneses becomes an obsession. In fact, studies show that people who flaunt their money or are very comparative about wealth tend to be miserable.

4. If you come into a lot of money, then financial planning is very important

One of the biggest mistakes lottery winners make is not planning for the future. Experts suggest that this includes establishing money goals, hiring trusted and reputable financial planners, and making sure tax liabilities are addressed. As mentioned, it’s shocking how many lottery winners squander their new found wealth in just a matter of years.

5. Money is not everything

The Roman thinker Seneca said it best: “It is not the man who has too little, but the man who craves more, that is poor.” Today, suicide, drug abuse and other social ills appear to be hitting the affluent harder than the disadvantaged. In fact, the perverse correlation between extreme wealth and unhappiness has become so pronounced that social scientists have coined the term affluenza to account for this phenomenon.

Most people think that winning the lottery will lead to happiness and financial security. But studies suggest that just the opposite is the case. If you really want to be happy, then help someone who is less fortunate than you.