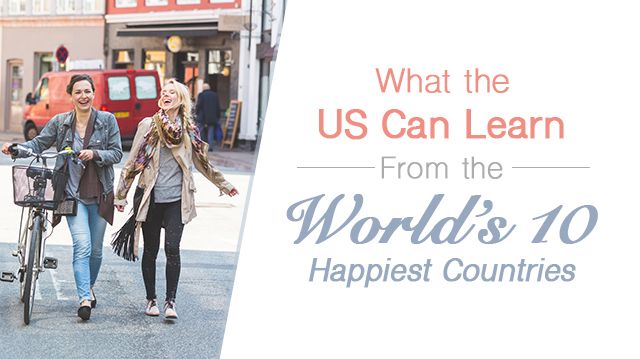 The UN’s fourth World Happiness Report was published last week, featuring both a list of the world’s happiest countries, as well as an analysis of how this happiness was attained. The report provides an important perspective on what the happiest countries in the world do differently, and what the US and all countries should focus on to create happier societies.

The report used a 10-point scale to rank 157 countries in terms of happiness. Cheery Denmark came in first (for the third time) with a score of 7.526, while Burundi, a tiny country in Central Africa embroiled in a violent political crisis, was ranked the least happy country with a score of 2.905. The US sits at 13 on the list, failing again to make the top 10, but moving up two spots from last year’s list. We’re behind mostly Northern European countries, as well as Switzerland, Canada, New Zealand, Australia, Austria and Israel.

After collecting and analyzing people’s self-reported accounts of their happiness, as well as more objective data like health and economic indicators, the researchers found the following six factors to be the greatest predictors of a country’s happiness: Gross domestic product (GDP) per capita, social support, healthy life expectancy, freedom to make life choices, generosity, absence of corruption and equality.

In terms of GDP, the US ranks higher than all of the countries in the top 10 except for Norway. However, as the report authors explain, it takes a lot more than a strong economy for people to be happy. According to the report, “When countries single-mindedly pursue individual objectives, such as economic development to the neglect of social and environmental objectives, the results can be highly adverse for human well-being, even dangerous for survival.”

Jefferey Sachs, the director at the Earth Institute at Columbia University and co-author of the report, said in a statement that rather than taking such a narrow, economic-focused approach, we should seek to build societies that are successful, equal and sustainable.

Sachs has also said that the world’s happiest countries have less inequality and more social protection than we do in the US. “The US mostly leaves the poor to fend for themselves. Not so in the happiest countries,” Sachs says. “They possess what is called the ‘social democratic’ ethos: that society should look after each other, and especially the least well-off. The top countries don’t accept that their CEOs walk away with tens of millions of dollars of annual compensation, while the shop floor worker experiences declines in real purchasing power. The top countries don’t accept the flood of money in politics and lobbying that virtually defines the US political system today.”

So how do we get happier?

These are the sad but true facts: The US is the only high-income country without universal access to health care, and we don’t even break the top 40 when it comes to life expectancy. We also have the most inequality out of all advanced countries and provide the least amount of social protections to our citizens. While these policies appear to have made at least some people rich, they don’t appear to be making us happier as a society.

My opinion? Only when we stop focusing on how much individual wealth we can amass and start focusing on enacting policies to ensure that all Americans have enough, will the US become a happier place to live.