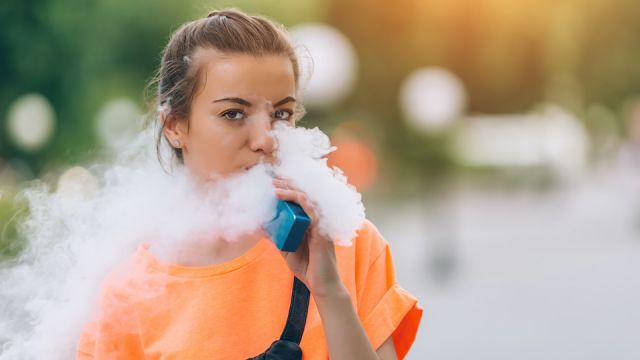 Experts warn that cigarette smoke and coronavirus may be a deadly mix, making you susceptible to infection. But what about vaping? Since the onset of the pandemic, self-soothing behavior has become the norm, whether it’s overindulging in chocolate and wine — or vaping marijuana and tobacco. But now, new information is shedding a light on the dangers of vaping during these pandemic-ridden days. Is vaping increasing your chances of getting COVID-19?

If you’ve ever contemplated quitting vaping, now may be the time. The World Health Organization (WHO) has sounded the alarm that smoking tobacco is a known risk factor for severe disease and death from many respiratory infections, including COVID-19. And it’s not just about the impact smoke has on your lungs; it’s also about the nicotine you’re vaping. Cigarette companies have always controlled the impact and delivery of nicotine in many ways, including, adding flavorings to mask the unpleasant taste and aroma and to maximize ingestion.

But it’s no surprise, especially since the Justice Department won a lawsuit, forcing “big tobacco” to finally come clean to America — via newspaper and television ads — about the deadly effects of smoking. Even during this global pandemic, “big tobacco” and the nicotine industry continue to push products that limit your ability to fight COVID-19 and recover from the disease. In fact, according to WHO, “big tobacco” has even offered free branded masks, delivered to your door during the pandemic, and has lobbied for their products to be listed as “essential”. And they continue to target the most vulnerable, school-aged children because “if your product kills eight million people each year, you’d also target a new generation.”

But while many studies report that smoking can significantly increase your chances of developing severe viral symptoms, researchers are just now discovering the ways vaping boosts the virus’s ability to ignite some of COVID-19’s nastiest symptoms. Just like smoking cigarettes, vaping weakens the lungs. Back in April of this year, the FDA and CDC began investigating severe respiratory illnesses linked to the use of vaping products. Apparently, patients reported a gradual start of symptoms that included shortness of breath, difficulty breathing, and in some cases, chest pain before hospitalization. In addition, some people reported mild to moderate vomiting and diarrhea, or symptoms such as fatigue and fever. And in many of the cases, patients told either healthcare personnel or health department staff that recent vaping products contained THC, the psychoactive compound in marijuana that gets you high.

Since investigations are still ongoing, investigators have not concluded whether it’s a specific device or type of vaping liquid responsible for causing the severe lung injury among otherwise healthy young people in their teens to early 20s. However, anyone who is vaping or using e-cigarettes, with either nicotine or compounds from marijuana or hemp could be placing themselves at risk reports The New York Times. Additionally, according to the FDA, what further aggravates or may even cause E-cigarette, or vaping, product use-associated lung injury (EVALI) is a chemical called vitamin E acetate, used to dilute THC oil in vape cartridges to make it go further. Many of the samples of vaping fluid used by the sick patients contained the chemical.

Meanwhile, Colorado and Ohio have banned vitamin E acetate. As well, the Massachusetts government issued an advisory to warn the public and mostly young people, that smoking and vaping can intensify the risks of spreading Covid-19.

How to quit vaping when you identify with the culture

Quitting vaping, or smoking for that matter, is difficult for many reasons. Cravings and addiction certainly play a big role, but so does identity. The choices you make reflect who you are and what you value.  Few people choose their identities, suggest Psychology Today. Instead, they build their belief system from family, culture, peers, and even marketing. Tobacco and e-cigarette companies target young people methodically through ads that promote flavors, untruthful health claims, and lifestyle benefits. It’s easy to get hooked when you’re young, impressionable and want to fit in. Figuring out who you want to be socially can be complicated. Many teens succumb to peer pressure and move towards lifestyle choices that are not the healthiest, like vaping, smoking, and drug abuse. Let’s face it; when you’re young, you feel invincible. Until… you’re not.

It’s time to imagine your life without vaping

It might be hard to imagine your life without vaping – especially if it’s a culture you identify strongly with. Smokefreeteen suggests making a mental shift away from vaping.

The bottom line: Quitting during this pandemic is vital for your health. Not only could it save your life, but also prevent you from requiring hospitalization. Stopping means you could save someone else’s life — by stopping the spread.