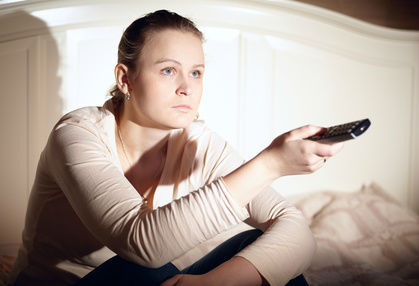 We all know that excessive television viewing can contribute to increased lethargy, weight gain, and less time for healthy activities such as exercise. However, did you know that several studies have found that television may raise blood pressure levels, as well?

A study published in the journal, Medicine and Science in Sports and Exercise, surveyed the TV habits of nearly 4,000 Australian adults. These individuals were divided into two groups: those who had increased TV viewing over a five-year period, and those whose TV viewing remained about the same during this time frame.

When the researchers examined individuals from both groups for key symptoms of metabolic syndrome, they found that both men and women who had reported an increase in TV viewing over five years also (not surprisingly) experienced weight gain, especially around their middles.

According to the Mayo Clinic, metabolic syndrome is characterised by elevated blood pressure and cholesterol, as well as high blood sugar levels and excess belly fat. These symptoms combined lead to an increased risk of diabetes, stroke and cardiovascular disease.

An earlier study, published in Archives of Pediatrics & Adolescent Medicine, linked ‘screen time’ activities such as TV viewing, computer use, and video games to possible increases in blood pressure in young children, regardless of the child’s weight or body type.

A research team analyzed time spent in front of a screen by 111 children between the ages of three and eight; 57 boys and 54 girls. They compiled readings from an accelerometer worn by the children on the right hip, as well as their screen time and sedentary time as reported by their parents, for a period of seven days.

Upon examination of the results, the study authors wrote, “the results of this study showed that TV viewing and screen time were associated with elevated blood pressure independent of body composition in children.

These two studies are simply the tip of the iceberg linking television viewing to poor health, increased junk food cravings, obesity and more. Dr. Mercola states, “I am absolutely convinced that television watching is a major contributing factor to many of our most common health problems, both physical and emotional.”

The solution is simple: as addictive as the ‘idiot box’ may be… just turn it off and walk away. You may find that you feel instantly better as you begin to engage more with your loved ones, and other important aspects of your life, to the fullest.