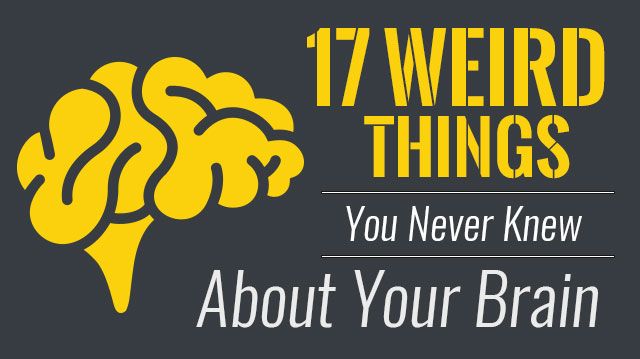 The human brain is actually quite mind-blowing – no pun intended. Without it, you wouldn’t be able to think, move or breathe. Even so, while it communicates messages to control our entire body, many of us know very little about this essential organ. Seventeen weird facts about the brain will shed a little light on what’s really going on in that brain of yours?

Next time you pick up a 10-pound bowling ball, think of that in terms of the weight of your head. The human brain takes up three of those pounds (1,300 to 1,400 grams.) In comparison, an elephant’s brain weighs over 6,000 grams, and a cat’s brain weighs a mere 30 grams.

Your brain is made up of 65 percent fat

I’m not fat — I’m just big-brained. But seriously, your brain needs good fat like omega-3 fatty acids for mental clarity, concentration and focus. If your body is loaded with bad fats, your brain won’t function as well.

Your brain is 75 percent water

A study conducted on dehydration and the brain suggests that dehydration not only causes shrinkage of brain tissue, but also negatively impacts day-to-day executive functions like planning and visuo-spatial processing. These are skills that allow us to visually perceive objects and the space between those objects. Consider that the next time you’re dehydrated.

That’s right, the brain itself does not feel any pain because there are no nociceptors (receptors that sense pain) located in the brain tissue. So, why do we get headaches? There are four types of headaches according to BrainFacts.org: vascular, tension, traction and inflammatory. Vascular headaches result from high blood pressure. Tension headaches result from the tightening or tensing of facial and neck muscles. Traction and inflammatory headaches are symptoms of conditions that range from stroke to sinus infection.

Your brain is made up of white and gray matter

Forty percent of your brain consists of gray matter located on the surface of the brain, which serves to process information in the brain. The other 60 percent is white matter, buried in the inner layer of the brain’s cortex, which transmits signals to the gray matter.

Your brain uses 20 percent of your body’s energy

The brain uses more energy than any other human organ. In fact, two thirds of the brain’s energy resource is used to help neurons “fire” or send signals. The remaining third, however, is used for cell health maintenance or “housekeeping,” which keep brain tissue alive.

Your brain is like the Energizer Bunny — it keeps going and going. When you’re awake, your brain generates 10 to 23 watts of power. That’s enough energy for a really “bright” idea.

You actually use more than 10 percent of the brain

The best-known brain myth suggests that we only use 10 percent of our brain. While we all have huge reservoirs of untapped mental potential, the 10 percent myth is wrong. Apparently, we use all of our brain — although, at any given moment, only one percent of the brain’s neurons are active. Nevertheless, the whole brain has a scientifically recognized function.

Ask any woman and she’ll tell you, women handle pain better than men do. If you agree, unfortunately, you’d be wrong. Research suggests that pain is very hard to study because it’s so subjective. While men may hide pain to protect their masculine image, there may be more at play than simply machismo. Women may cope better with pain, but men are less sensitive to it, suggests research.

You may have heard that Einstein’s brain was larger than average — all true. Is that why he was so intelligent? Well, according to the National Science Foundation (NSF), studies of Einstein’s brain conducted in the 1980s revealed that Einstein had an unusually large number of brain cells, called glia, in his cerebral cortex. The NSF reports that a 2013 study on newborn mice, who had glia injected into their brains, grew to become faster learners as adults.

A wrinkly brain is a smart brain

Why? Because the more wrinkles and folds your brain has, the bigger the surface for neurons. The more neurons, the smarter you are. In fact, human brain wrinkles are even thought to be as hereditary as human height, suggests the NSF.

It turns out that those piano lessons your mother encouraged you to take were also good for your brain. New research suggests that musical training enhances your ability to detect subtle emotional cues in conversation. According to Nina Kraus, Hugh Knowles Professor of Communication Sciences and Neurobiology at Northwestern University, musicians have a heightened response to the complex portion of the sound when the frequency rapidly changes.

It seems that when your body is at rest your brain isn’t. “A great deal of meaningful activity is occurring in the brain when a person is sitting back and doing nothing at all,” says Marcus Raichle for the NSF. Apparently, when your mind is at rest, isolated brain areas are chattering away to one another. 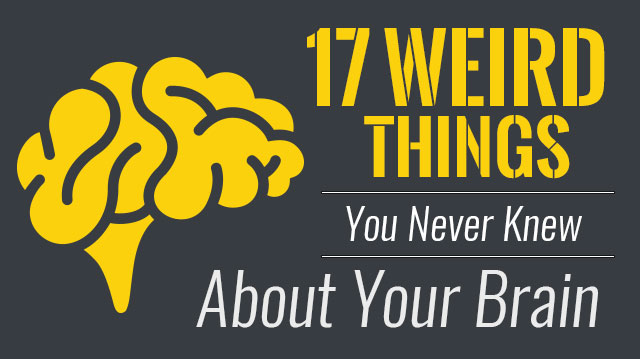 Your brain and gut are connected

You are what you eat. According to Harvard Health, studies show that when people improve their gut flora with probiotics (supplements with the good bacteria), their anxiety levels, perception of stress and mental outlook improve.

Your brain is more efficient than a computer

The human brain’s unparalleled performance continues to inspire researchers to study and imitate its computing power. Computer models built to replicate how the brain processes, memorizes and retrieves information are called artificial neural networks. However, artificial neural networks can’t seem to replicate some of the basic characteristics of the human brain. So in spite of supercomputer advances, the human brain continues to be the most flexible and efficient information-processing device in the world — for now.