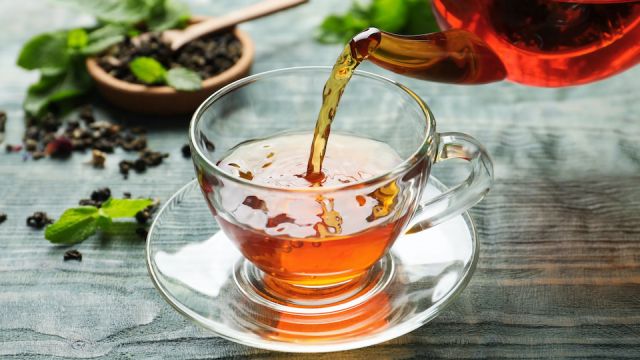 If you are trying to quit your soda habit, or perhaps reduce your daily cups of coffee, you may cast an eye towards tea. There are thousands of different teas to choose from, each with different flavors, properties, and benefits, and if you’re going to ditch the soda or coffee, you might as well drink one that makes it worth your while. So, which tea is the healthiest?

Tea is a natural, plant-based beverage that can help soothe everything from pain and inflammation to a scratchy throat. Most of us reach for a cup of tea when we’re feeling under the weather or want to warm up on a cold winter’s day. But tea can also be consumed daily to help improve overall health.

The 6 Healthiest Teas in the World

White tea enjoys world-wide popularity as a beauty tea. Studies have shown that white tea has potential anti-aging activity via inhibition of the enzymes collagenase and elastase, and may help protect skin cells from sun damage. It’s no surprise then that white tea is often an ingredient in up-market skincare products.

White tea also has many other benefits for health. A recent study at Pace University indicated that there is a major health benefit of white tea extract — it can kill bacteria, viruses, and fungi in the body with more success than other teas. The study focused primarily on the bacteria that cause Staphylococcus infections, Streptococcus infections, and pneumonia. The same study concluded that fluoride-rich white tea helps prevent the growth of dental plaque, the chief cause of tooth decay.

True tea, such as black, green, oolong, and white, are all produced from the leaves of the plant Camellia sinensis. It is how each tea is harvested or processed that differentiates the various products from the same plant, meaning there are slight variances in the amounts of antioxidants in each. Of the true teas, white tea has the highest concentration of antioxidants, because it is the least processed tea. By this standard, it might be considered the “healthiest” of them all. As far as antioxidants are concerned, white tea is followed by green tea, then black tea.

Green tea, including matcha, is considered one of the healthiest teas available. It’s typically minimally processed and features delicate leaves that are either steamed or roasted. Green tea is packed with antioxidants and catechins, including a particularly well-researched one called EGCG or epigallocatechin gallate.

Research shows that this tea catechin may help to protect heart health by decreasing inflammation and improving blood circulation. By improving circulation, green tea helps to lower the risk of heart disease, including heart attacks. The anti-inflammatory properties of the tea help to lower blood pressure and reduce LDL cholesterol. A 2014 study looked at 25 randomized controlled trials on the link between tea and blood pressure and reported that when people drank tea—especially green tea—for 12 weeks, their blood pressure dropped significantly. A 2011 study reported that drinking green tea appeared to be linked with lower levels of bad LDL cholesterol.

Green tea may also help to accelerate weight loss by boosting metabolism and encouraging the breakdown of fats—rather than glucose—into energy. In addition, studies have shown that green tea may be able to prevent the replication of certain types of cancerous cells, including those found in breast cancer and lung cancer. In some conditions, green tea may even be able to induce apoptosis of the cancer cells themselves. Another study found that polyphenols in green tea may lower the risk of Alzheimer’s disease by interacting with the “building blocks” that form beta-amyloid plaques. Overall, green tea delivers some impressive health benefits making it worthy of regular consumption.

This everyday tea is rich in antioxidants known as polyphenols, and an abundance of research suggests that consuming it on a daily basis may be beneficial to the heart. As a matter of fact, a review in the European Journal of Clinical Nutrition states that drinking more than three cups of black tea per day is associated with a reduced risk of coronary heart disease. Another meta-analysis examined fifteen randomized controlled studies and found that drinking black tea seems to lower harmful LDL cholesterol in healthy adults. A recent review also suggests that black tea can also reduce LDL cholesterol in those with a higher risk of cardiovascular disease. An 8-ounce serving of black tea does have about 45 milligrams of caffeine (about half the amount in coffee), so it may be best to incorporate it into your morning routine to ensure it does not interfere with sleep.

Another type of tea with antioxidant properties is rooibos, or “redbush tea,” which is prepared from the Aspalathus linearis plant native to South Africa. Research has suggested that the antioxidant effects of rooibos are similar to, if not quite as strong as, those of green tea.

A recent animal study has suggested that the antioxidants in rooibos tea may protect the liver from oxidative stress, helping to render this organ more resilient to damage from toxins. Moreover, rooibos has also been cited as helpful in lowering blood pressure and relaxing tense muscles, thanks to its active constituent chrysoeriol.

Unlike green or black tea, rooibos does not contain any caffeine, so it won’t have the same stimulating effects, making it safe to drink well into the evening.

If you’re feeling anxious, try swapping your triple espresso for a cup of peppermint tea. Unless it’s mixed with green, black, or white tea (check the label), peppermint tea is a caffeine-free, tea-free, zero-calorie beverage that packs in so many health benefits, it’s amazing that it comes in such a small package.

Peppermint has been shown to help ease digestive symptoms of IBS, such as stomach pain, diarrhea, and constipation. Peppermint has also been shown to be a strong antioxidant with antimicrobial and antiviral activity. Therefore, sipping peppermint tea may help relieve symptoms of the common cold, thanks to menthol’s ability to thin out mucus and soothe the sinuses and throat. Peppermint tea’s active compound menthol can help to relieve migraines and headaches, and also has the added benefit of freshening your breath.

The dried flowers of chamomile contain many terpenoids and flavonoids that contribute to its medicinal properties. Chamomile tea has been used for many human ailments such as hay fever, inflammation, muscle spasms, menstrual disorders, insomnia, ulcers, wounds, gastrointestinal disorders, rheumatic pain, and hemorrhoids.

Known as the most relaxing tea, chamomile is a caffeine-free tea brewed from the leaves of the chamomile flower. With a mild, slightly sweet, and floral taste, it’s a comforting beverage that is sure to calm you before bedtime. Chamomile has long been thought to have a sedative effect, and recent research gives some proof to the claim. Research also supports the use of chamomile tea to balance moods, fight pain and inflammation, soothe PMS, and fight cancer.

Which Tea Is The Healthiest In The World?

It’s almost impossible to say which tea is the best for improving health because every person will react differently. For general health purposes, the best option is usually a tea with lots of antioxidants, such as green, white or rooibos tea. To get the widest range of benefits, try drinking a caffeinated “true” tea such as green tea in the morning, and a caffeine-free herbal infusion such as rooibos, peppermint or chamomile in the evening. Although the health benefits of each type of tea are important, the perfect cup of tea to improve your health will be the one you enjoy the most.