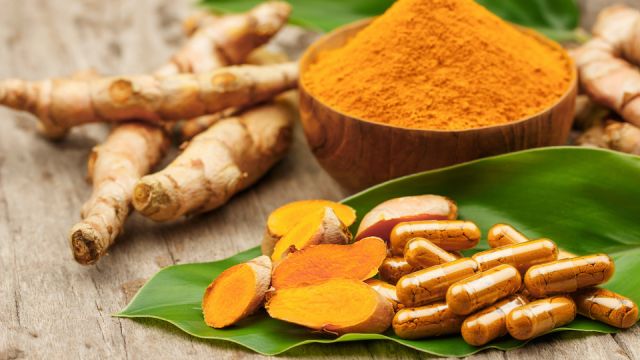 Turmeric, known for its bright yellow color, is a popular Asian spice similar to ginger. It’s touted as a super spice and has the potential to treat a wide variety of conditions — or so we’re told. But is all that glitters really gold? Experts say yes. Thanks to turmeric’s main compound, curcumin, a powerful substance with anti-inflammatory and antioxidant properties. If you’ve ever indulged in golden milk or supplemented daily with curcumin for inflammation, you’d understand that what research says about turmeric is certainly true.

Turmeric, the superstar of the spice world

Beyond its culinary uses in mustards, butter, cheeses, and curry powders, turmeric has become a superstar of the spice world thanks to its many medicinal benefits. Although used for thousands of years in Ayurveda and other traditional medicines, today, turmeric’s active compound curcumin is promoted as a popular dietary supplement to help heal a variety of conditions. And its popularity comes down to one thing — what research says about turmeric is true. The following clinical trials are currently studying curcumin and are supported by the National Cancer Institute:

Research points to turmeric as a powerful anti-inflammatory

One of the biggest reasons why you should include turmeric in your diet, now more than ever, is because of inflammation.  Acute, short-term inflammation is incredibly important. Its purpose is to control and eliminate pathogens and to remove damaged tissue so that the body can heal. Without it, pathogens would take over your body, and you would die. Although short-lived inflammation is needed, it can turn into a big problem when it becomes chronic and improperly attacks your body’s healthy tissues. Experts believe that factors such as obesity, stress, alcohol, and smoking contribute to chronic inflammation. And the impact it has on your body may include everything from allergies and arthritis to diabetes and heart disease. Stress, diet, obesity, and poor sleep are some of the major risk factors that promote chronic inflammation and symptoms may include:

Curcumin has strong anti-inflammatory properties. In fact, according to research, so much that it is equally as effective as some anti-inflammatory drugs but without side effects. Turmeric can fight chronic inflammation, thus helping to prevent and even treat certain diseases. Here’s what else research has to say about turmeric.

The amount of curcumin in turmeric is not that high. Typical doses, which normally exceed one gram a day, are hard to come by via consuming the spice alone. So, if you want to experience the effects of turmeric fully, you need to take a supplement that contains significantly more curcumin. In addition, curcumin is poorly absorbed into the bloodstream. Studies found that up to 24 hours after taking turmeric, only trace amounts of curcumin was actually found in the body. So, experts suggest consuming black pepper to aid absorption. The reason: black pepper’s main compound is piperine, the substance that not only gives pepper its heat but also enhances the absorption of curcumin by 2000 percent.

The positive health claims about turmeric continue to grow. After all, curcumin, turmeric’s main compound, does show fantastic promise as a preventive agent for a wide variety of diseases. Most likely due to its powerful anti-inflammatory properties. So, as researchers continue to study turmeric, we’re discovering more and more that what they have to say about turmeric is worth listening to.