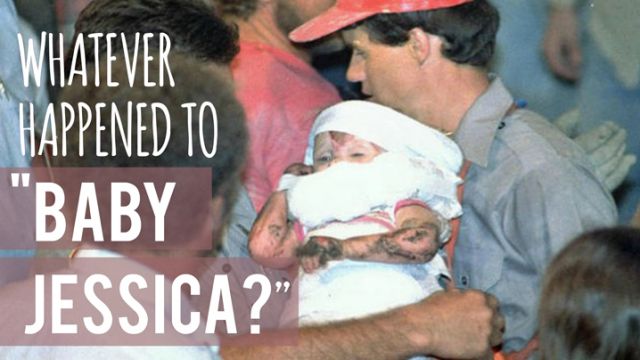 At 18-months old, Texas born Jessica McClure Morales, also known as “Baby Jessica,” had fallen down a 22-foot well in her aunt’s backyard, where she remained trapped for 58 hours. Twenty-nine years later, we all want to know, whatever happened to the little girl, once dubbed “everybody’s baby?”

The rescue of baby Jessica McClure

In October 1987, viewers around the world tuned in to watch CNN — America’s first 24-hour news network — around-the-clock as a dramatic news story unfolded live on television. A small child had fallen down a well.

How Jessica fell into the well is a mystery since, according to her mother, the well opening had been covered up by a heavy rock. For the next 58 hours, she remained trapped in a well 8-inches wide and 22 feet below ground.

First the rescue team needed to drill a hole 30-inches wide and 29-feet deep, parallel to the first well. After that they had the arduous task of drilling a horizontal tunnel between the two wells, about 2 feet below where Jessica was trapped.

Meanwhile, they pumped oxygen into the well and continued to keep communication going with Jessica, who moaned, wailed and even sang nursery rhymes to pass the time, according to bio.com.

Finally, on the evening of October 16, 1987, thanks to the hard work and determination of the rescue workers, Jessica was safely lifted out of the well.

Dubbed “everybody’s baby,” thousands of strangers sent Jessica’s family flowers, toys, cards and money. Donations, totaling in the hundreds of thousands of dollars, were placed in a trust fund for her to inherit at the age of 25.

Today, Jessica has her own children according to The Dallas Morning News. In 2011, Jessica McClure Morales turned 25  and was able access her charitable trust, valued between $700,000 and $800,000. She lives with her husband, Daniel Morales, and their two young children in a nice neighborhood less than two miles from the spot where she fell into the well.

“That’s all Jessica has ever wanted was to be a mom and have a family,” said her father Chip McClure to Today. “She’s a good mom and keeps her eyes on her kids. She’s certainly a doting mother.”