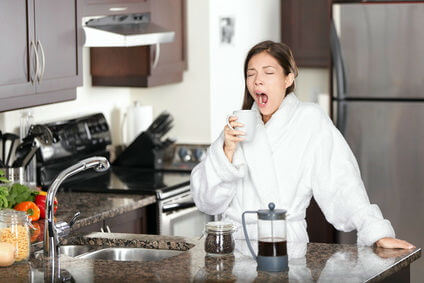 Are you a night owl or a morning person? New research  from one of the world’s leading sleep exerts, Till Roenneberg, a professor of chronobiology at Ludwig Maximilian University in Munich, says that if you try to live and work outside of your natural circadian rhythm you may be negatively affecting your health.

Roenneberg says that chronotypes refer to whether a person tends to wake up early, late, or somewhere in between. When forced to wake up earlier than your body naturally would, you suffer what he refers to as “social jet lag.” Sleeping out of synch with this natural rhythm can affect mental functioning.

This can be especially difficult for late chronotypes as it goes against the standard work schedule. Studies have shown that obese adults with late chronotypes tend to eat larger meals, have sleep apnea more often, and higher levels of stress hormones as well as lower levels of “good” cholesterol, or HDL, than obese people with other chronotypes. It’s also noted that just one hour of “social jet lag,” which is the mismatch between chronotype and schedule, can increase the risk of obesity by 33 percent.

When you think about it, it makes sense that humans would have different times to be optimally awake. Throughout much of history, some people needed to be awake and alert late at night, while others needed to wake up early in the morning to defend against enemies, among other reasons.

If you or someone you know is a night owl and has trouble waking up early in the morning, you’ve probably already had the thought that it may be biological, and research has shown this to be true. Our chronotype is said to be reflected in every cell of the body. It isn’t a lifestyle choice, but a trait that’s in the DNA.

Unfortunately, the myth prevails that early risers have good values while late risers are lazy, but it’s one that should be questioned. Late chronotypes may be much more productive working throughout the night and then sleeping well into the day.

Of course, if you’re a late riser, you probably can’t tell your boss that you’re changing your schedule. What you can do, says Roeneeberg, is get outside more because “infusions of sunlight can help nudge late chronotypes toward an earlier sleep time.”

It helps to increase alertness by suppressing melatonin, the hormone associated with sleepiness. Eating a healthy diet and getting plenty of exercise is also essential.

If you continue to struggle so much that the quality of your life is affected, you might want to consider a change in career to something that will allow you to work when you’re at your best.

It’s better to get a job that fits your chronotype than to try and rearrange your chronotype to fit your job, which is often impossible. With the advent of the Internet, there are more ways than ever to work from home and create your own hours.

In the meantime, you can try and reset your internal clock by:

What chronotype are you, and have you been fighting your natural circadian rhythm or have you learned to live with it?