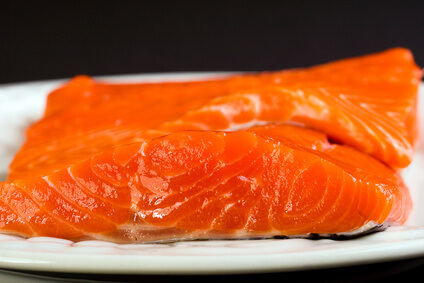 We have good news and bad news. The bad news is that genetically modified salmon is nearing FDA approval, and seems very close to becoming part of America’s food supply. The good news is that a couple of national grocery stores, plus a few smaller food retailers, have agreed not to sell the new GM monstrosity.

Both Whole Foods and Trader Joe’s, big names across the country, announced that they will not carry Franken-Salmon in their stores. Aldi Stores, which appear throughout the eastern United States, and Washington state’s PCC Natural Markets have also decided not to sell the salmon.

Whole Foods spokeswoman Jennifer Marples assures, “we’ve stated publicly for years that our quality standards prohibit the use or sale of genetically modified or cloned seafood. We believe all farmed animals – whether raised on land or in water, should be from breeding programs designed to promote their welfare rather than developed solely on production or economic outcomes.”

GM salmon are engineered by the Massachusetts-based company AquaBounty, and are known as AquAdvantage. These salmon grow to their full size in 18 months, instead of the natural 3 years. They were originally engineered in 1989, with a genetic modification that causes an overexpression in their growth hormone genes.

Since 1995, AquAdvantage salmon have been struggling to get FDA approval. Sadly, it now appears they are close. The FDA has already stated that it deems Franken-Salmon to be safe, and is now awaiting final government approvals. If it is approved, it will be the first genetically modified animal introduced into our food supply.

According to AquaBounty, GM salmon, “will be grown as sterile, all-female populations in land-based facilities with redundant biological and physical containment. As a result, AquAdvantage Salmon cannot escape or reproduce in the wild and poses no threat to wild salmon populations.”

However, Colin O’Neil, regulatory policy analyst for the non-profit Center for Food Safety, disagrees. O’Neil states that AquaBounty’s own documents show that up to 5 percent of Franken-Salmon could be fertile, and could mate with wild salmon if the fertile ones happen to escape. The potential impact of this possibility is truly troubling.

We watch and wait for more establishments to realize that carrying GM salmon is not worth the harm it may cause to the health of our population, and to the environment.