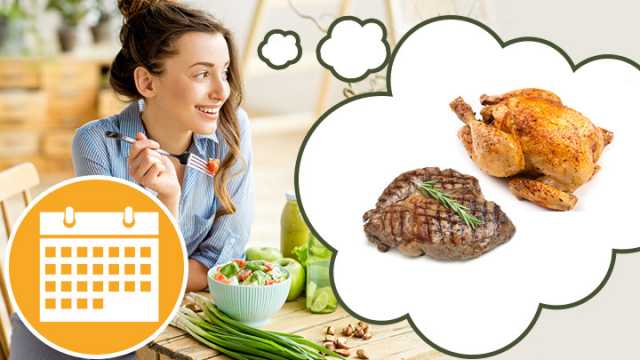 For a short while in my life I embarked on the world of vegetarianism — in fact, I was actually more vegan than vegetarian. But then, one year later, I decided to slowly include meat back into my diet. Today, you could probably call me a semi-vegetarian or flexitarian. Because truthfully, due to the guilt I experience cooking and eating meat, I prefer to eat it only when I truly crave it or need the extra protein and iron. Here’s why I chose to become a vegetarian and what turned me back into an omnivore.

Why I chose to become a vegetarian

For me, the decision to remove meat from my diet stemmed solely from the belief that humans have no right to eat any living creature — period. In short, I believe all lives have equal value, even if they’re a non-human animal. An offshoot from this, which also helped fuel my vegetarianism, includes the horrendous treatment animals endure for the sake of consumption.

However, when I further chose to be a vegan it wasn’t so much fueled by animal cruelty, but rather, for the purpose of eating healthier and greener, and because I was experiencing a sensitivity to both eggs and dairy. I ate no animal products what so ever, and feasted on some pretty amazing vegan banana bread. So, now you’re probably wondering what brought me back to the “dark side.”

Although I became a vegetarian for animal welfare and ethical concerns, I hoped that an added perk would be weight loss. But if you aren’t vigilant with a vegetarian diet, it’s easy to skip vital nutrients, vitamins and proteins that provide energy and helps keep your metabolism running smoothly.

I really tried to maintain a high-quality diet with perfect protein sources — at first. But after long work days, it was so much easier and tastier to forgo lentils and rice for a plate of pasta loaded with cheese, or worse, a fast-food veggie burger and fries, loaded in salt, cheese and calories. I began to see that as a vegetarian I was seeking nutrients from processed meat replacements that, when broken down, are really nothing more than junk food.

In addition, I also found myself craving sugar, most-likely due to a vitamin B12 deficiency. Some vegetarians or vegans (particularly newbies) find themselves reaching for more processed and sugary foods like vegan cookies, or even “ice cream” more often, and then, end up packing on unwanted pounds.

I have one vegetarian friend who wouldn’t dream of eating a veggie burger, because it too closely resembles meat. Yet, she often finds herself carb-loading on candy. The bottom line: Becoming a vegetarian requires a diligent effort to get enough protein, iron, calcium, vitamin D and vitamin B12 in your diet. And if you’re thinking of turning vegan, then make sure you brush up on a little amino acid chemistry as well.

I wasn’t on board with soy

Before becoming a vegetarian, I grew up eating hamburgers, meatloaf and pasta sauce with meat and so on. Therefore, a natural transition into vegetarianism included replacing red meat with soy-based meat substitutes. In fact, I was using soy as one of my main sources of protein. I used it in place of hamburger meat, and also used soy milk in place of dairy. About this same time, I tested positive for hypothyroidism, or an underactive thyroid. I soon learned that soy may be a significant contributor to thyroid dysfunction. However, studies debate whether this is actually true for healthy people.

Nevertheless, soy has also long been thought to interfere with the body’s ability to absorb the medication required for hypothyroidism. In addition, 90 percent of non-organic soy is genetically modified. Organic soy is also very hard to digest and can restrict vitamin and protein absorption. Soy also contains phytoestrogens, which can interrupt your body’s normal hormone function. Since I was already struggling with a thyroid issue, I didn’t want to take the chance of further creating havoc in my body by eating soy.

I love to cook and bake, and was always on board to whip up a batch of tasty vegan cookies or create an amazing nut loaf. But then, life got crazy. My hubby became ill and I became his primary caregiver. I was trying to maintain my business and trying to maintain a household, plus cater to an ill family member. Right or wrong, I had no time to search vegan recipes and create perfect proteins. In addition, since my husband was on a strict diet, it was so much easier to support weight loss with a lot of vegetables and a little non-factory farmed, grass-fed chicken and beef.

But, I’m still concerned about the ethical issues…

Being a vegetarian and a somewhat reluctant vegan — although short-lived — did force me to look more closely at the factory farming industry, also known as concentrated animal feeding operations. Unfortunately, much of the meat products in the U.S. are the result of operations that focus on volume and profit, with little regard for animal welfare, human health or the environment.

Today, I am still concerned with animal protection and the ethical issues associated with eating animals. So, just because I decided to add meat back into my diet doesn’t mean that I support the horrendous practices of factory farming. Knowing where my meat comes from is just as important as being a vegetarian or vegan.

I still cringe at handling meat

Not all vegetarians or vegans struggle with their food preferences, so by no means am I advocating eating meat as the only solution to good health. And, I certainly won’t lie and say that I’m a “finger-licking” carnivore — because I’m not. I still cringe at making meatloaf or hamburgers, or anything else that requires me to handle meat with my hands. I feel guilty eating meat at times, and I don’t think that will change.

While I still enjoy vegetarian or vegan cuisine at few times a week, the more protein and fewer carbs in my meals have helped with sugar cravings a lot. But most importantly, when I do eat meat, I choose meat that has nothing to do with the awful practices of the factory farming industry.