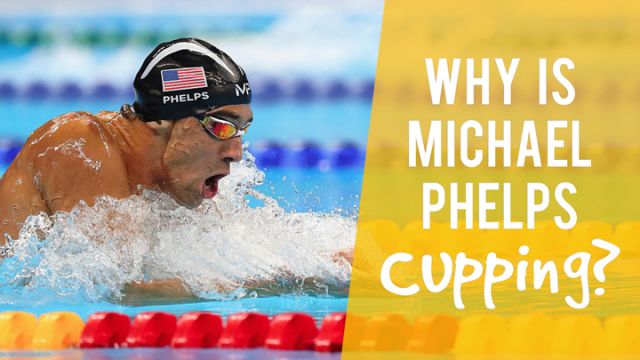 If I were to suggest to you to let someone put super hot cups on your bare back to create suction and then pull them off to reduce muscle pain, would you do it? Would you do it if I told you that Olympian Michael Phelps does it?

Cupping therapy is receiving a lot of news coverage these days thanks to some very high-profile athletes. If you are plugged into the Olympics happening in Rio De Janeiro, Brazil, you may have seen evidence of this ancient practice that some say is rooted in folklore.

Most recently, attention has been given to U.S. swimming star Michael Phelps and gymnast Alex Naddour. Both of them have been receiving cupping therapy during the games, as evidenced by the bruises they are sporting and their willingness to talk openly about this age-old alternative therapy.

Cupping is touted by alternative health practitioners for its ability to reduce muscle soreness, remedy blood diseases and reduce the pain and inflammation caused by arthritis and more. If you spend any time in Asia, specifically China, you will even see street cuppers performing the technique out in the open air.

I have a lot of respect for many ancient Eastern alternative health practices; many of which seem to hold merit when used alongside conventional treatments. After doing thorough research on cupping, I found a collection of rather small, slightly biased studies. However, this is not uncommon for out-of-the-box alternative therapies such as this. One must always have an open mind when approaching such therapies and realize that the Western world is still eons behind such practices that have been around for thousands of years.

What people are saying

Dr. Rachel Vreeman, director of research at the Indiana University Center for Global Health, gave an overview of how cupping works. First, heated glass cups are placed on the skin. As the glass cools, a suction is formed between the skin and the cup. When the cup is pulled off, blood vessels are broken and a bruise forms. Vreeman is certain that the marks left behind by the cupping session are a reminder of the therapy and serve to bolster a placebo effect.

A placebo effect occurs when a person has a response to something, either positive or negative, due to the belief in the treatment itself. Symptoms might actually improve or get worse after treatment.

Kathleen Lumiere, an assistant professor of acupuncture and oriental medicine at Bastyr University in Washington, said that cupping therapy is thought to mobilize blood flow to the skin which creates an immune response.

Dr. Axe goes on to say that there is evidence of cupping treating a number of different conditions that conventional medicine has been unable to remedy, including common colds, pinched nerves, back pain and pulmonary tuberculosis. In addition, cupping therapy is often employed in the healing regime for anemia, arthritis, fertility issues, and even mental illness.

According to the British Cupping Society, the practice can help with the following:

What are the dangers?

As with any therapy, one must consider the risks. Although participating in a cupping session now and again appears to pose no real serious danger, there are a few things to be aware of.

It should be noted that if you visit a reliable practitioner there is very little risk involved with the procedure.

Athletes swear by it

Many athletes swear that the practice makes them feel better, especially after a hard workout. In fact, Naddour says that the cupping kit he bought on Amazon.com is one of the best purchases he has ever made. Others in support of the practice state that cupping helps their back and general aches and pains.

How far will athletes go?

One question that floats to the surface here is: how far will athletes go to be faster, stronger or recover more quickly? How much are they willing to subject themselves to in order to be the best?

Throughout history, athletes have led the way when it comes to new and sometimes questionable therapies, regardless of whether the science exists to support their efficacy. In 2009, elite Olympic athletes were sporting copper bracelets hoping they would somehow improve their performance.

Olympic athletes were also using brightly colored adhesive known as Kinesio tape all over their bodies in 2012. This tape, developed by a Japanese chiropractor, is supposed to reduce pain and support muscles without diminishing flexibility. According to an advertisement, the tape “alleviates discomfort and facilitates lymphatic drainage by microscopically lifting the skin.”

If the practice of cupping follows suit with the copper bracelets and Kinesio tape, it is likely that we will see a brief but substantial increase in the number of people trying the technique. Of these people, some may be helped, some may not. Everyone reacts differently, and it is important to find the right therapy for your condition.

As always, be cautious before embracing any new health remedy. Don’t jump on any bandwagon without first doing your research just because some high-profile figures, athletes, movie stars or political icons embrace such a practice. The only way to know if something works is to try it yourself.