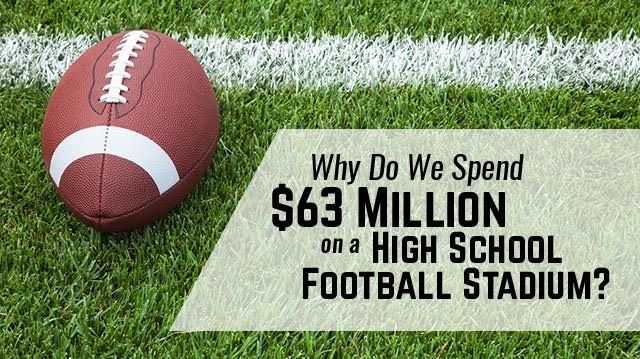 The construction of pricy stadiums for high school students in Texas reads like a juvenile contest over whose is bigger. The Allen, Texas stadium gained publicity (and criticism) for being the most expensive high school football stadium in the United States in 2012. It priced in at around $60 million. Construction on a $61 million stadium in Katy, Texas began in 2016. Now, McKinney School District has pulled ahead of the competition with its own price tag of $62.8 million.

The Dallas News has tracked what it calls the “high school football stadium arms race” all the way back to the $15 million Dragon Stadium constructed in 2001. Since then, costs have slowly worked their way up to the bloated price tags we see today.

The proximity of some sites make the expense seem even more extravagant. The $60 million, 18,000 seat stadium serving Allen Independent School District is a mere four miles away from McKinney. The town of Plano, just under fourteen miles from McKinney, sports a 9,800 seat stadium. Is sharing not a thing in Texas?

McKinney defends their project, pointing out that the 12,000 seat stadium will replace the district’s 7,000 seat Ron Poe Stadium, which the town has outgrown. Moreover, they argue, the space will be multipurpose, also hosting soccer games and band competitions. The town anticipates that the project will spur development in the area and lead to increased revenue. Apparently, restaurants and retail shops have already expressed an interest in the surrounding area.

Proponents of the project point out that they have been extremely transparent about the pricing of the stadium. Without the inclusion of site preparation and infrastructure costs, the stadium is priced closer to $50 million, they argue.

McKinney’s plans were brought to light by community activist and blogger Curtis Rath. As a resident of McKinney who has been critical of the town’s spending practices, Rath filed a Freedom of Information Act request and published spending details on his blog. “I am a football fan, he professed. “I like to see football. I wanted to see a stadium. It was just the cost and extravagance of the stadium that bothered me.”

In defense of McKinney, they aren’t only spending buckets of money on football. A $220 million bond proposal also includes band hall expansions at three schools, a new auditorium at one of the town’s three high schools, various infrastructure renovations and a technology plan that will give all incoming freshman a laptop. Security upgrades included in the proposal would install cameras that are directly connected to police patrol cars at every school.

The town has been planning a new stadium since 2000 but has been forced to build new schools instead to keep up with increased enrollment. Having waited 17 years, it is no wonder the district is keen to construct a blow-out building.

Alongside all the criticism and downright confusion over how and why any high school football team could need such pricey stadiums, one reporter decided to visit the town of Allen to find out.

Karen Given expected to find controversy but instead found a community united in their love of the sport. Their 14,000-seat stadium was full. Every senior and every member of the 550 piece marching band was in full costume. Those she spoke to were happy to foot the bill and one even worried that the new stadium wouldn’t be big enough.

Voters ultimately approved the McKinney proposal by a closer voting margin than expected, so clearly some residents see the town’s new stadium as extravagant. Still, voters decided by a two-thirds majority that the stadium should be built and confidently defend the decision.

Perhaps no one outside of Texas really understands the state’s love affair with football and an accompanying willingness to foot a similarly outsized tax bill.