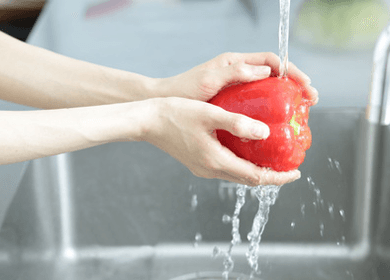 While many people have adopted the practice of rinsing their fruits and vegetables with water before eating them, is this practice really accomplishing anything? What about organic produce, does it need to be washed as well? With an ever increasing body of research relating to pesticides and other dangerous chemicals lurking in our food, it pays to pay attention.

The Environmental Working Group is a non-profit organization whose mission is to protect the public from environmental and health issues using public information. They reviewed over 50,000 tests for pesticides conducted by the USDA and the FDA between the years 2000 and 2005. With this information, they created two lists, one with the 12 most contaminated fruits and vegetables and one with the 12 least contaminated produce. This is highly useful information in light of the mounting concern over present day agricultural practices.

All fresh fruit and vegetables carry bacteria, some that is dangerous and some that is beneficial. According to a study from the University of Colorado Boulder, the type and amount of bacteria found on fresh produce varies depending on cultivation practices and the type of produce. Similarities in bacteria were found in certain groups of produce. For instance, strawberries and spinach had microbes from one family while apples, peaches and grapes had surface bacteria from several families. Such things as farm location, storage temperature and time of transport were all identified as impacting the type and number of bacteria present. 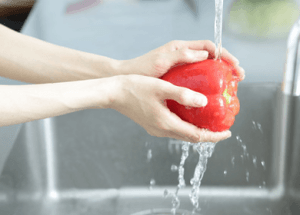 So, if we know that our fruits and veggies potentially carry pesticides and some possibly harmful bacteria, is a quick rinse good enough to take care of all of this? Experts suggest that this is not enough. First of all, pesticides are created to repel water and you can wash all day long, and they will still be on your food. Secondly, there are certain disease causing microbes that form defensive communities on and within the food making them highly difficult to destroy. It is these kinds of communities of bacteria that can cause such things as Salmonella and e. Coli. While natural fruit and vegetable wash or baking soda is recommended to remove pesticides, the bacteria are a different story. According to research, irradiation, a food treatment method being used on some non-organic produce, may be the only way to totally destroy the harmful bacteria deep within fruits and veggies. Irradiation exposes food to an electron beam which inactivates parasites by disrupting the genetic material of the cells. However, irradiation also kills all beneficial nutrients and bacteria located in the food leaving bacteria-free but also nutrient-free produce. Food irradiation is not mandatory at this time; however, if it were to become so, purchasing organic would be the only way to assure that you were not getting food altogether void of any nutrients and beneficial bacteria.

Although there is a chance that organic crops surrounded by conventional crops become victim to pesticide dust in the air, there is less chance that they are as heavily impacted as non-organic produce. To be safe, always wash organic produce with a natural fruit and veggie wash.