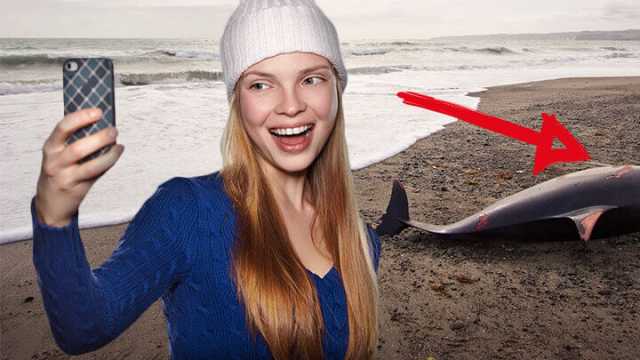 How far would you go for Facebook likes? Recently, tourists in Argentina dragged a baby dolphin from the ocean and stood around it taking selfies. The incident occurred in San Bernado, about 200 miles to the south of Buenos Aires. A crowd gathered around to touch the dolphin and didn’t return it to the sea. The incident was even caught on video.

A witness, who was just identified by the name Claudia, told C5N that the crowd just let ithe baby dolphin die. “[It] was really little and it came to shore. They could have returned it to the sea. In fact, it was breathing. But everyone started to take photos of it and to touch it. They were saying it was already dead,” Claudia said.

Last year, something similar happened. An endangered baby dolphin was plucked from the water on a beach in Argentina. It was then passed around by a crowd of beach-goers for petting and photos.

There was footage of that incident too — and it was clear from that that no one intervened to try to return the dolphin to water. The footage has since been removed from YouTube. The Washington Post reported that the dolphin was “left to die in the mud, where it can be seen lying motionless.”

Also last year, two peacocks died in a zoo in China after visitors used them for selfies. In this case, the visitors were reported to have handled the birds roughly and violently plucked at their feathers.

One of the peacocks, a five-year-old male, died of fright half an hour later. Veterinarian Dr. Li told local media that peacocks can be frightened to death and can suffer heart attacks if exposed to serious shocks. Other animals such as rabbits are similarly fragile.

There was also that really long python that 15 men held onto, posing for photos and for TV cameras. That snake also died. And a swan died in March last year after a tourist dragged it from a lake in Macedonia in order to pose for a photo with it. In a similar way, a man dragged a stranded shark out of the water to then hold it down and pose for photos. In this case, it seemed the shark was traumatized when it returned to the water.

And a World Animal Protection report has documented how some lion holding facilities take cubs from their mothers when they are just a few weeks old, so that tourists can touch them and take selfies with them. Once the lions are fully grown and too aggressive to interact with tourists, they are often euthanized or sold, sometimes to canned hunting facilities. These are places where lions are released into private parks or enclosures where it is easy for a paying hunter to kill them.

But it’s just a photo…

While there are certainly other situations and events in the world that are much more concerning, this animal-selfie phenomenon also isn’t as trivial as it may seem at first. The message behind the animal selfie is that these wild animals are trophies — not so different to hunters taking photos with the lions and elephants they kill.

If that level of animal cruelty is normalized, it’s not a great leap to the exotic pet trade. There’s also the blurring of the difference between humans interacting with domesticated animals and with wild animals like dolphins. Wild animals should be protected as an integral part of the ecosystem. They are not photo props or fashion accessories.

The psychology behind the animal selfie

An animal lover myself, I’ve volunteered at an animal rescue shelter and had photos taken of myself with the giant tortoises, monkeys and parrots I was looking after. To an extent, this desire to remember our time with such beautiful creatures is understandable.

But there’s a line, where people taking the selfies are unaware of the animal’s needs and they end up abusing it — like holding it down against its will or invading its space when it’s clearly distraught. Such actions are filled with self-entitlement, objectification of the animal, naivety and a misplaced sense of self-value.

In a material world where we are brought up to believe that a car, house or clothing indicates our self-worth, some people also believe that the elephant they manage to kill, or the dolphin they forcibly take a photo with, also says something about who they are. And indeed it does, though not what they think.

How to stop animal selfies

If you ever see people taking selfies with a wild animal, do whatever you can to help it — especially if the animal is in distress. Let people know they are harming the animal and ask them to stop immediately. Then, make sure to give the animal space to return to its natural environment. If it’s sick or injured, call the appropriate wildlife authorities and keep people away until help arrives.

Remember: loving animals isn’t about taking photos with them — it’s about giving them space to be free.