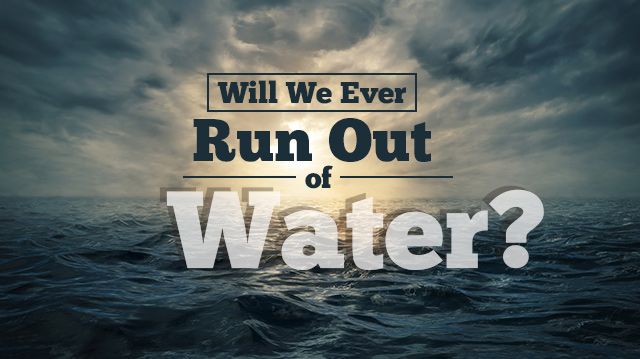 The rising threat of global warming has led to tensions about many natural processes on Earth going awry, processes that we once took for granted. One of these is the availability of freshwater on our planet. We’ve already seen increased droughts and rivers drying up as a result of changing climates.

What’s next? Will we eventually run out of water?

The answer isn’t quite that simple. The Earth is made mostly of water, so it would take a radical and unprecedented event for ALL of that water to dry up. However, much of this is saltwater, which is unfit for drinking. As far as freshwater, our planet has processes to keep this water cycling around. However, some supplies may be depleting, as we may be using too much too fast.

James Webster, a volcanologist and curator of the Department of Earth & Planetary Sciences at the American Museum of Natural History, explains:

“Earth contains huge quantities of water… Over millions of years, much of this water is recycled between the inner Earth, the oceans and rivers, and the atmosphere. This cycling process means that freshwater is constantly made available to Earth’s surface where we all live.”

“While our planet as a whole may never run out of water, it’s important to remember that clean freshwater is not always available where and when humans need it. In fact, half of the world’s freshwater can be found in only six countries. More than a billion people live without enough safe, clean water.”

On this issue of freshwater availability, Professor Iain Stewart, a geologist and broadcaster for the BBC, adds:

“Nearly two million people die from a lack of safe drinking water every year. And in just 15 years time, half the world’s population could be living in areas of high water stress — places where there isn’t enough water to go round.”

Some of our sources of freshwater are more at risk than others. One of these is our underground aquifers, which provide us with 35 percent of our water. According to data collected by NASA’s GRACE satellite system in 2015, 21 of the 37 largest aquifers in the world have had more water taken from them than was replaced during the 10-year study period.

These aquifers are replenished by nature through rain and melting snow. However, it can take thousands of years for them to refill completely.

The agriculture and food processing industries use a great deal of water, and making these processes more water-efficient could go far. According to Dr. Upmanu Lall, professor of engineering at Columbia University:

“We could… improve water use by improving food processing, storage, and delivery as a means of reducing the 30 to 40 percent food loss that currently occurs post agricultural production. With one-third of the developing world expected to confront severe water shortages in this century, this is not a problem that we can ignore or avoid, and we’re working hard at the Columbia Water Center to find answers.”

Along with purifying polluted drinking water, we can also convert saltwater to freshwater. According to Professor Iain Stewart, one way to obtain fresh water from ocean water is through the process of desalination: literally removing the salt from saltwater. However, according to Stewart:

“Lots of pressure is needed to force the water through the membrane — and that’s energy intensive and expensive. If desalination is going to be a realistic source of fresh water, we either need lots of cheap energy, or a way to make the process more efficient.”

While we wait for these technologies to improve, there’s a lot that each one of us can do at home to conserve water. Here are just a few examples:

Water is one of our most precious resources. Do you have any other ideas to help conserve the water we have?