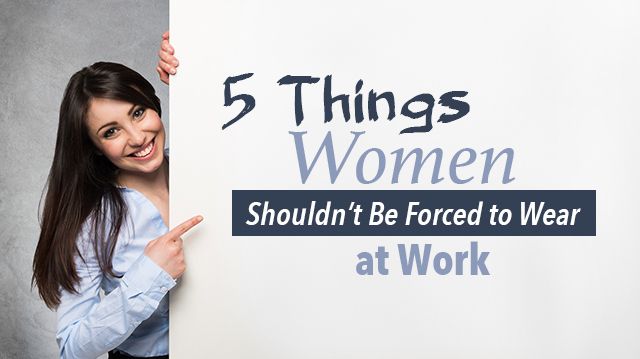 London receptionist Nicola Thorp was fired when she refused to wear heels at work, so she launched a petition to the UK government to outlaw mandatory high heels. “Current formal work dress codes are out-dated and sexist,” she wrote. At the time of writing, the petition has 127,000 signatures — enough to force the British parliament to debate it.

This case however, is the latest in quite a long history of women being forced or pressured to dress in such a way that damages their health, restricts their movement and prizes male perception over dignity and the value of their contribution to work.

Here are five things women are judged on when they apply for a job or while working that shouldn’t be even an issue.

Airline El Al was another example of many where women were forced to wear heels. All female flight attendants had to wear heels until passengers were seated, that is, until those workers also organized a petition against it.

Given that I can’t remember ever looking down at an attendant’s shoes while boarding, and given that plane safety and emergency regulations are meant to be paramount, the rule showed that the company thought its female employees were there to be decorative, rather than serve customers well.

High heels restrict muscle function, reduce blood flow and cause back pain, joint pain and ingrown toenails, as well as other long-term problems, such as bunions. They make women fragile and less mobile, as women in heels can’t walk at a normal pace or run..

Scientists at the University of Alabama at Birmingham estimate that there were 123,355 injuries related to high heels between 2002 to 2012 in the United States alone. Wearing them by choice? Fine. Job requirement? No way.

It’s still very common for women to be turned down for a job if they don’t wear makeup, especially when applying to be waiters, bartenders, newscasters, receptionists, and anything in retail.

A woman in New York last year commented on the social website Reddit that she was working as a switchboard operator and was fired for not wearing makeup. Another woman who worked in marketing who often did wear makeup but went a few days without, was told she had to wear a minimum of concealer, eyeliner and mascara every day to work. A few years ago, a woman called Melanie Stark who worked as a sales assistant in a HMV music store in the British department store Harrods was fired for not wearing make-up.

The store in fact had a very detailed guide to how its female employees should dress, including “Full makeup at all time: base, blusher, full eyes (not too heavy), lipstick, lip liner and gloss are worn at all time and maintained discreetly (please take into account the store display lighting which has a ‘washing out’ effect),” Salon reported.

A study by a UK beauty retailer Escentual found that 68 percent of bosses wouldn’t like to recruit a woman not wearing makeup. Around 49 percent of them said that women should look “attractive and pleasant” when applying for public sector jobs, such as in the hospital and hotel industries. Basically, for men to have a “professional appearance,” they only have to be clean and tidy, whereas women have to spend big on “beauty” products. Makes you rethink the gender pay gap doesn’t it?

Skirts instead of pants

Short skirts are something women in many professions are pressured to wear, even though they too restrict movement, force women to be mindful of how they sit, and stop women from bending down or crouching.

Skirts are more likely to lead to success in the workplace, according to a University of  Hertfordshire study. But a plunging neckline and a very short skirt apparently take it too far, according to that same study.

There seem to be a lot more studies about what women should wear than men. Remember when the media picked apart Argentina President Cristina Fernandez’s wardrobe choices when she was head of state in the South American country, asking her questions about her shoes and clothes that they’d never dream of asking male leaders.

Of course, anyone of any gender should be free to choose to wear a skirt, but the constant pressure on women to do so is part of putting their appearance before the work they actually do.

“The dress is so tight that you can see your underwear through it,” an employee of Joey Restaurants told the investigation. She claimed she was told not to wear underwear at all in order to avoid this.

Similarly, a University of Alberta class project on sexism in the restaurant industry found that dress codes unnecessarily sexualized female staff. One woman wrote to the study, “I was often told that I needed to show more skin. I was 17 years old. No 17-year-old should be getting in trouble for not showing enough skin.”

Ironically, it’s often the same sort of people who blame a woman’s way of dressing for sexual assault and harassment of which she’s a victim.

Black women are pressured not to wear their natural hair, there’s major stigma around gray hair and an expectation that women style their hair (which is time-consuming and costly). Even men are often told not to have long hair.

Glamour magazine even went so far as to tell women at a New York law firm that afros — not a style but normal hair for an African American person — were a “no-no,” and that a “political” hairstyle such as dreadlocks are inappropriate for the workplace. Or the Missouri company that told a woman she had to cut her dreadlocks to keep her job: the woman said dreadlocks were part of her culture, but she was told they weren’t “professional.”

Then there is Rhonda Lee, the African American meteorologist fired by a TV station in Shreveport, La. after defending her choice to wear her natural hair on air. And the white female meteorologist recently handed a sweater while broadcasting to cover up her bare arms and shoulders?

These cases raise the question again, of what it means to look professional? Does indigenous president Evo Morales of Bolivia not look “professional” because he wears Bolivian clothing rather than a Western suit and tie? Perhaps “professional” is code for “clothing that appeals to Western white men.”

In many workplaces, women are still judged by how they appear before what they contribute. And how they should appear is defined by a white male gaze, rather than themselves and their own ideas of dignity. Sex and gender aren’t perfectly binary anyway. Isn’t it time to drop the male/female dress codes?