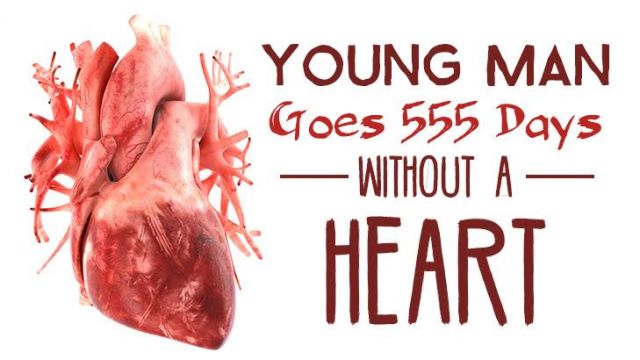 We’ve all heard the expression “he wears his heart on his sleeve.” One man wore his heart on his back for 555 days and lived to talk about it. Now there’s hope for other heart patients waiting in line for a transplant.

Stan Larkin was 16 when he collapsed on the basketball court. He was diagnosed with an inherited heart condition, arrhythmogenic right ventricular dysplasia (ARVD), which causes an irregular heartbeat. Facing the risk of sudden cardiac arrest, Larkin’s doctors installed a defibrillator as a temporary fix to control the electrical signals within his heart, according to Medical Daily.

Unfortunately, Larkin’s heart disease progressed to bi-ventricular dysplasia, meaning both of his heart’s chambers were unable to pump blood. To make matters worse, his disease was progressing rapidly. He was put on the heart transplant waiting list. But each day 22 people die waiting for a transplant, according to government data.

In April 2012, Larkin’s body began to retain fluids at an alarming rate. Doctors said he would eventually need a new heart to live. Because of his common blood type, O-positive, Larkin was in line behind numerous others seeking a transplant.

“He was dying of shock. His heart was not pumping enough blood around to maintain health of all of his vital organs and without urgent intervention he would not have survived,” Dr. Jonathan Haft of the University of Michigan Hospital told Michigan Live. In November 2014 Larkin’s real heart was removed from his body — but the story doesn’t end there.

Big Blue to the rescue

Larkin then received a 418-pound pneumatic artificial heart nicknamed “Big Blue.” The goal was to keep him alive until a transplant was available. But now the father of three had limited mobility and was left bedridden. For just over two months he lived in the hospital, unable to leave. On December 23, things changed for Larkin after the FDA approved a portable machine that worked the same as the larger one.

He wore his heart on his back

The Freedom Portable Driver (FPD) weighs just 13.5 pounds. With the larger artificial heart, there were two tubes that exited Larkin’s body. Originally, those two tubes had to be connected to Big Blue to deliver compressed air into the ventricles, allowing blood to be pumped through his body. The compressor, powered by an electronic system, controls the movement of air in and out through those tubes into the device.

Up to that point, patients had to stay in the hospital waiting for their transplant, but with the new technology Larkin was able to leave the hospital to wait for his transplant. The artificial heart maintained his circulation with a mechanical pump, making him otherwise completely healthy.

Dr. Nader Moazami, director of the Cardiac Transplantation and Ventricular Assist Device Therapy Program at the Cleveland Clinic, told FoxNews.com we are still many years away from a permanent artificial heart. “Although tremendous strides have been made, biocompatibility will always remain a challenge,” said Dr. Moazami. The longest anyone has lived with the most widely used device worldwide, the SynCardia temporary TAH, was nearly four years.

Heart disease is the number one cause of death in the U.S., killing more than 611,000 people in 2015, according to the Centers for Disease Control and Prevention. This technology could be a godsend for those in need of a heart and have no transplant available.

Larkin received a new heart last month at the University of Michigan Frankel Cardiovascular Center. Unfortunately, Larkin’s younger brother, Dominique, also was diagnosed with ARVD. He waited six weeks in the hospital before receiving a heart. Sadly, Domonique also lost two of his three children to the genetic heart condition.