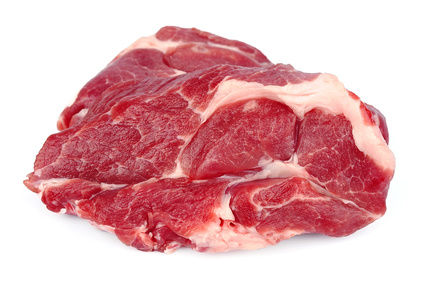 Factory farming is all about high output and low costs. But… there is a cost. A cost that the animals, the environment and our health all have to bear.

The more animals crammed into small spaces, the more money. According to the journal National Hog Farmer, “crowding pigs pays.” Bernard Rollins, egg-industry expert notes, “chickens are cheap; cages are expensive.” It is this mentality, along with the principles of supply and demand, that drive the factory farming industry.

Meat is the mainstay of the traditional American dinner, and the average consumer is shopping for their meat at their local grocer, where they will find something that compositionally resembles a toxic sludge more than a piece of high-quality meat.

The sad truth is, however, that many don’t know this, and just looking at a piece of conventional, factory-farmed beef will not give the sordid details away.

Filled with additives that contribute to the degeneration of health, most factory-farmed animals are also fed genetically-modified feed that is tainted with glyphosate, which makes its way into the body.

A 2011 study that was published in the journal Clinical Infectious Diseases elevated “gross and disgusting” to a whole new level. Researchers found that half of all United States supermarket meat contained staph infection bacteria, including MRSA, the hard-to-kill and potentially deadly strain. Turkey, followed by pork and chicken, contained the most staph bacteria.

Recently, investigative health reporter Martha Rosenberg brought to our minds yet another scary fact about factory-raised meat: the widespread use of ractopamine in American farming.

This highly controversial drug is used in up to 80 percent of all pig and cattle operations, and is also found in turkey farming. A beta-agonist drug, ractopamine increases protein synthesis, making animals more muscular. This, in turn, reduces the fat content of the meat and substantially increases the profit margin.

The drug is also used in asthma medication, and weight gain is a common complaint amongst patients using Advair (a beta-agonist drug). Manufacturers have added weight gain to the list of possible side effects for this drug along with increased heart rate, headaches, tremors and insomnia.

Beta-agonist drugs have been used in the American cattle industry since 2003, and are generally administered in the days leading up to slaughter. Over twenty percent of the drug may remain in the meat that consumers purchase.

Regulations require that there be a two-week flushing period before slaughter for other drugs to clear the animal’s system, but not for ractopamine – there is no clearance period given, so this drug can be used right up until the time of slaughter.

Two powerful food and animal safety groups in America have brought a lawsuit against the FDA, claiming that they have withheld records pertaining to the dangers of ractopamine as used in industrial animal farming.

What the groups got when they asked for more information was only 464 pages of over 100,000 pages of existing data. No more information is being released from the FDA at this time, and the Center for Food Safety and the Animal Legal Defense Fund say that materials are being unlawfully withheld.

Banned Around the World

Ractopamine is banned in food production in over 160 countries around the world, including countries in Europe, Russia and China, because of its adverse health effects. Over 1,700 people have reported being poisoned by eating pigs fed the drug. If even minute traces of the drug are found in imported meat in countries where it is banned, it is turned away, and hefty fines – and even imprisonment – are levied for its use in these countries.

Why are We Not Informed?

Why is it that other nations are more informed than Americans when it comes to food safety issues? Examples include protests in Taiwan last year when there was a threat that the ban on ractopamine might be lifted, or the ban that Russia (the fourth largest importer of American meat) issued on American meat imports until the US could verify the meat to be free of ractopamine. However, the US does not even test for the presence of this drug in meats sold, despite the fact that research has indicated reason to test.

Animal research that has been done on this dangerous beta-agonist drug has revealed some scary side effects including:

The FDA has even linked the drug to excessive hunger, bloating, hoof problems, lameness, stress, aggression, anorexia and death in both pigs and cattle, with death topping the list as the most common and extreme side effect in both types of animals.
The European Food Safety Authority states that ractopamine causes elevated heart rates and heart-pounding sensations in humans.

Two very similar cousin drugs to ractopamine, clenbuterol and zilpaterol, which both cause adrenalin effects in humans, are banned from the Olympics. Alberto Contador, a cyclist, failed a Tour de France anti-doping test in 2010 for levels of clenbuterol, which he claims he got from eating meat. This drug has been banned or restricted in meat after cases of human toxicities.

Yes, You do Have Options

The first and most important step in understanding how to feed yourself and your family safely is to know that antibiotics, pesticides, genetically modified ingredients, herbicides, hormones and other drugs such as ractopamine are allowed to be in your food. Know that not all meat is manufactured equally. Factory-farmed, or CAFO meats, are much different than those raised on pastures, organically.

Although pasture-raised meat is often superior nutritionally, the biggest advantage is that it is safe and free of damaging drugs and toxins. Keep in mind that these chemicals build up in human tissue over a lifetime, and while immediate indications of their presence may not be seen, they can cause silent damage over the years.

If your goal in 2014 is to optimize your health and the health of your family, you must return to basic and clean eating. Eating as few processed foods as possible, including factory -farmed meats, is a great place to start.

Put your trust in organic and whole foods that have not been altered, and in meat that has been raised as nature intended, without harsh drugs, hormones, fertilizers and pesticides.

Find a local farmer near you who understands – they can supply you and your family with healthy and humanely-raised animal products and produce. Go to EatWild.com and LocalHarvest.org to find resources close to you.