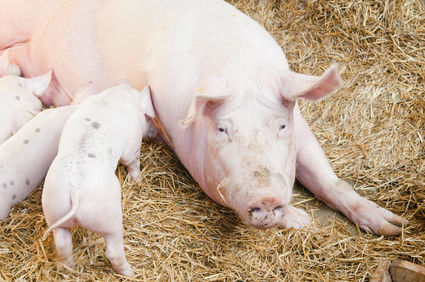 It should come as no surprise to most people today to learn that the majority of animal feed used in industrial animal farming contains genetically modified (GM) components.

While this may seem innocent to some, to others, the horror of feeding animals GM feed is all too real and horrific.

Danish pig farmer Ib Pedersen is one of Europes largest pig suppliers, raising up to 13,000 pigs each year. When Pederson switched to GM feed he began to immediately see signs of trouble amongst his pigs. He witnessed everything from stomach ulcers, to bloating and diarrhea to piglets born with severe deformities and horrible sickness.

Frustrated, Pedersen decided to experiment with the GM feed and put the pigs on a diet of fish meal and non-GMO soybean. Within a matter of days, the problems he had witnessed with the GM feed went away. According to Pedersen, switching back to to a normal diet resulted in a visible improvement in pig health. He noticed the following:

“Less abortions, more piglets born in each litter, and breeding animals living longer.” He also maintains that man hours have been reduced, with less cleaning needed and fewer complications with the animals.

Pedersen believes that glyphosate, a potent herbicide, in the GM feed was one of the major contributors to the demise of his pigs. Although Pedersen’s findings are somewhat unscientific in nature, the Danish Pig Research Center is currently reviewing the case.

Pedersen’s finding contributes to a growing stack of peer-reviewed studies that note farmers’ reports regarding the disastrous impacts of glyphosate-based herbicides and crops modified to tolerate their application.

Animal feeding studies have shown that GM soya feed causes sterility, stunting and death in rats. For over twenty years, professor Emeritus Don Huber of Purdue University (a senior scientist with the USDA) has studied crop health and warned how the reduced mineral content of glyphosate-tolerant crops leads to nutritional deficiencies in livestock that cause reproductive problems.

Manufacturers claim that the herbicide sold as Roundup is safe, however, epidemiological studies tell a different tale. According to research, Roundup is a serious threat to health and can cause such problems as endocrine disruption, cancer, birth defects, neurological disorders and even DNA damage. The scary fact about the possible damage that Roundup can cause is that these effects can happen at very low doses that are now being discovered in food and feed crops as well as contaminated water.

Roundup has been found in the air, rain, groundwater, human urine and even in blood samples. Current “safe” dose regulations for Roundup are not based on any new studies and are not protecting anyone.

More than 75% of genetically modified crops are what is known as “Roundup Ready.” This simply means that large doses of this toxic herbicide can be sprayed over entire crops and kill everything but the plant. Monsanto, maker of Roundup, was even exposed for hiding evidence of birth defects found in lab animals as long ago as the 1980’s.

With an increase in genetically modified soy in North and South America, Roundup and other agrochemicals are being used in mass amounts. A report created by concerned physicians in Argentina noted the effects of agrochemicals on people based on clinical data.

Another report, commissioned by the provincial government in Chaco, Argentina, discovered that birth defects increased four-fold and childhood cancers tripled in just ten years in areas where rice and genetically modified crops are heavily sprayed with toxic chemicals. Aerial and ground spraying were the methods of delivery, and glyphosate was named as the main chemical of concern.

It is not just people in the vicinity of the spraying that are at risk of experiencing adverse health problems, but also those who eat products made from sprayed crops.
Roundup-ready crops do not break down glyphosate, but rather absorb it, meaning that it is still in the food when it is processed. Both people and animals consume the toxic chemicals. People who eat meat or dairy products made from cows that have eaten tainted food are at risk.

Researchers note that Roundup and other formulations are far more toxic than glyphosate alone. However, it was only glyphosate that was tested, not these other herbicide formulations. Until testing is done on the formulations being sprayed on genetically modified crops, the risk continues for millions of animals, people and the environment.