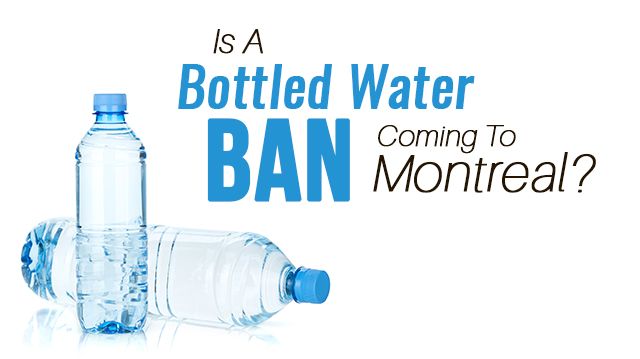 What are we to do about all of that plastic? Recycling is the first thought many come up with. This helps to an extent; however, many people do not recycle their plastic bottles, and many counties are ill-equipped to deal with recyclables. So the world is in need of a better option.

One innovative engineering firm in Germany has started building houses using plastic bottles — and I applaud this solution tremendously! However, if we didn’t have all that plastic lying around in the first place, we wouldn’t have to scramble to keep it out of landfills. Enter water bottle bans.

In the United States, Harvard University has banned the sale of bottled water on campus and now uses water-filtration systems instead. Over 90 other campuses across the country also have some type of bottled water ban. The cities of San Francisco, California, and Concord, Massachusetts, have limited citywide bottled water bans.

Our neighbors to the north are also taking action against bottled water. Many university campuses ban their sale, and in the city of Toronto, bottled water sales are banned in civic centers, city facilities and public parks. And, based on recent comments made by Montreal Mayor Denis Coderre, Montreal may be next.

The first plastic-fighting step taken by Mayor Coderre was making a plan to ban plastic bags by the year 2018. Although there are no specific plans in place yet as far as bottled water, the mayor did state that “plastic-bottled water is next on the city’s environmental to-do list.” There is a lot of speculation that this could indeed translate to a bottled water ban in the city of Montreal.

Bottled water can indeed help out in a pinch when a community’s water infrastructure has been compromised, such as the crisis in Flint, Michigan, where citizens’ water is contaminated with lead. Lui also points to many indigenous communities in Canada where clean drinking water is not available. However, casually drinking bottled water in places where the tap water is safe to drink, or can easily be filtered, is environmentally atrocious.

Plastic waste isn’t the only problem with bottled water. The plastic bottles themselves sometimes contain bisphenol A (BPA), which can mimic estrogen in the body and may potentially lead to hormonal disturbances. Even if a bottle does not contain BPA, the plastic it’s made of contains a number of chemical compounds, which could potentially leach into the water if it’s heated, say, by the sun on a hot day.

On top of that, in some areas of the world prone to drought, such as California, pulling water from waterways for bottled water can lead to even more damage.

The beverage industry in Canada is, not surprisingly, concerned about Mayor Coderre’s statement. Canadian Beverage Association representatives are arguing that if bottled water is banned, people may turn toward sugary bottled drinks instead. While this could be true in some cases, it is a person’s responsibility to make healthy choices, and does the toll bottled water takes on the environment justify its existence as a soda deterrent?

What do you think of bottled water bans? Do you think they are an effective environmental solution? Please let us know!