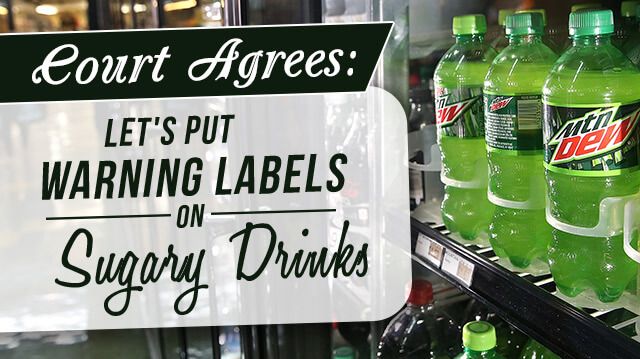 You gotta love San Francisco, the city that forbid McDonald’s from giving away toys with Happy Meals that contain high levels of calories, sugar and fat. Now, along that same “obesity prevention” vein, the city has passed a law that requires health warnings on ads for sugary sodas and beverages. While the warning may go unnoticed by some, it’s definitely a step in the right direction.

Come this July, if you live in San Francisco, this is what you’ll now see each time you pass a billboard, bus, transit shelter or poster at a stadium within the city that advertises soda and other sugar-sweetened beverages: WARNING: Drinking beverages with added sugar(s) contributes to obesity, diabetes and tooth decay.

A federal court in Northern California recently rejected efforts to block a the city ordinance requiring the warnings. Of course, that didn’t stop The American Beverage Association and other groups from attempting to sue the city to overturn the law. U.S. District Court Judge Edward M. Chen denied an injunction and is keeping the measure on hold while the case proceeds.

Sugar is why obesity is on the rise around the world. In 2014 there were an estimated 600 million obese adults worldwide, according to the World Health Organization. Sugar fills you up with calories but provides no nutrients and damages the metabolism. As well as gaining weight, sugar puts you at risk of developing Type 2 diabetes and heart disease.

Many people realize how bad added sugar is for health, but it’s just so darn sweet and tasty. But how much sugar is too much, and how much is safe to consume daily? Unfortunately, there’s no simple answer. Some people can eat some sugar without harm, while others absolutely need to avoid it as much as possible. The maximum amount of added sugar you should eat in a day according to the American Heart Association is 150 calories or 9 teaspoons (37.5 grams) for men and 100 calories or 6 teaspoons (25 grams) for women.

If only other cities followed suit

Soda and beverage manufacturers fear other cities will follow San Francisco’s example. Warnings on advertisements would remind consumers that too much sugar consumption puts their health at risk. It might even prompt parents to take away their child’s daily soda and replace it with a healthier beverage — and that negatively affects “Big Soda’s” bottom line.

“Requiring health warnings on soda ads also makes clear that these drinks aren’t harmless — indeed, quite the opposite — and that the puppies, unicorns, and rainbows depicted in soda ads aren’t reality,” said San Francisco Supervisor Scott Wiener, one of the 11-member board that unanimously approved the measure in 2015. “These drinks are making people sick, and we need to make that clear to the public.”

Personally, I never really understood the need for adding so much sugar to soda and other beverages. Heck, a healthier,  less-sugary soda could mean more sales for beverage manufacturers. But they clearly want us addicted to their product. While we can no longer plead ignorance to the addictive qualities of sugar, a warning label acts as a gentle reminder. Let’s hope other cities, states and countries follow San Francisco’s lead.