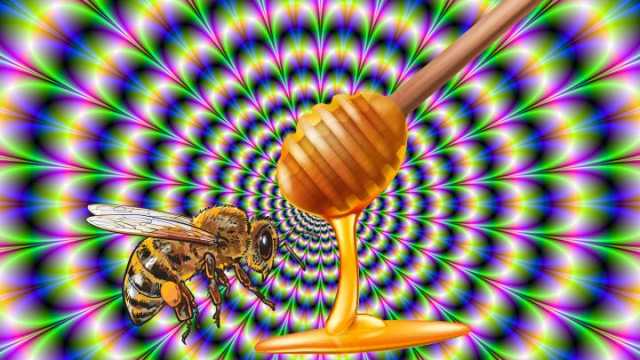 High up in the towering Himalayan foothills lives a very curious tribe. Called the “honey hunters,” this mysterious offshoot of Nepalese Gurung people has earned a reputation for themselves as being some very crazy folk indeed. They make their living scaling cliffs to harvest the valuable nectar of something called “mad honey,” which fetches a very hefty price at the local market.

To some, this curious honey is considered highly medicinal and worth its weight in gold — almost literally. To others, it’s known as “mad” and even “toxic.” As it happens, both groups would be right. Both neurotoxins and powerful natural compounds contribute to sickness in some and healing benefits in others. A truly paradoxical honey.

So what’s the backstory behind hallucinogenic Himalayan honey? And are its therapeutic claims really worth the risks? Read on to find out more.

Where does hallucinogenic honey come from?

“Mad” honey is nothing new to the world. For millennia, beekeepers around Turkey’s Black Sea region have collected honey that’s made from the nectar of pink-colored rhododendron flowers. Those flowers are highly toxic. The bees pass those toxins from the flower into their honey, which then creates a neurotoxic, sometimes hallucinogenic effect.

Documented cases of hallucinogenic honey intoxication date back to as early as 401 BCE. During this time, General Xonophon and his thousands-strong army of Greeks stopped off in the Black Sea region. They decided to partake in some honey they’d come across. Soon enough, most of the army “began staggering and raving like intoxicated mad men, shitting and puking and collapsing by the thousands.” Modern science has now revealed that this honey was harvested from bees that pollinated the rhododendron. The flowers passed toxins on to the unwitting sugar-starved Greeks.

Those rhododendron flowers contain a compound called grayanotoxin. This neurotoxin is known to cause hallucinogenic effects in those who consume honey from its pollen.

More recently, the Himalayan honey bee has been the subject of considerable interest due to the way it also produces hallucinogenic honey. Otherwise known as the Himalayan cliff bee, Apis laboriosa, this bee is curious not only because of the honey it makes. Himalayan honey bees are also the largest in the world. They measure in at an impressive 1.2 inches. This oversized bee is also known to nest at particularly high altitudes during the summer months. They are found between 9,186 to 11,482 feet (2800 to 3500 meters) in the subalpine zones of the Himalayas. Pretty impressive, as far as bees go.

The Himalayan honey bee builds its high-altitude nests under the overhanging rocks of cliff faces. This makes honey collection very difficult indeed. Yet that’s exactly what the local Gurung people do. They scale up to 984-feet high cliffs to collect the “red honey” hanging from the nests high above.

Known as “honey hunters,” these brave foragers are trained from generation to generation. They bring in the valuable proceeds from selling the honey to enthusiastic black market buyers in Korea and elsewhere. According to some reports, that honey reaches up to five times the price of normal honey, fueling the honey hunters’ daredevil efforts.

Those nests can reach up to five feet in diameter and contain up to 132 pounds (60 kilograms) of honey, making the harvest of this hallucinogenic food very lucrative indeed. The hunt takes place twice a year, in the spring and again in autumn. The villagers pack their knapsacks with rope and provisions, setting off for the cliffs their ancestors have visited for generations. Then, using only hemp rope and bamboo ladders, they begin their climb. They scale the precipitous cliff faces to collect the honey in a large bucket. They then pass it back down the ladder to another “honey hunter.” Over the course of a year, the 12 villages of “honey hunters” will collect around 6,613 pounds (3,000 kilograms) of red honey.

What are the effects of eating Himalayan honey?

And now to the big question: what happens when you eat this mystical honey? Well, to explain the effects this honey may have on your central nervous system and digestive tract, it’s probably best to examine what exactly it is that makes this honey so darn strange.

Like the honey that made General Xonophon’s army go raving mad millennia ago, Himalayan honey is made from the nectar of various species of rhododendron flowers. These flowers are known to contain compounds called grayanotoxins. Studies show there were also responsible for the Greek army’s violent reaction. That reaction has been observed in patients who have been rushed to the hospital after ingesting “toxic” honey.

In one study, researchers took samples from a honey product that had made someone experience “severe bradycardia and hypotension after ingesting two tablespoonfuls.” Researchers then injected those samples into rats. Researchers found that the toxic effect of the honey occurred when the grayanotoxins acted upon the vagus and affected certain areas of the central nervous system.

But let’s be honest: two tablespoons is a heck of a lot of honey to eat in one sitting! Other studies have found that, while grayanotoxin can certainly have detrimental effects on the body, those effects only occur at high dosages. And just like many other narcotics and hallucinogens, the effects of Himalayan honey can differ considerably between individuals.

Consumers who have tried hallucinogenic honey

Here are a couple of testimonials, reported on the website Reddit, from people who dabbled in some of this hallucinogenic honey:

Biologist Sean McCann agrees with the second testimonial. “The compounds involved are not super fun. Not something I would recommend, as there are far better and safer hallucinogenic compounds that you can use.”

“Not super fun,” according to a 2011 study published in the Texas Heart Institute Journal, can include dizziness, hypotension and bradycardia at low doses. In high doses, grayanotoxin from red honey can cause temporary loss of consciousness, heart blockages and even heart stoppage. Perhaps it’s not worth it, after all?

Is there any therapeutic element to Himalayan honey?

According to some sources, the local Gurung tribes who collect the honey believe it to have healing powers. They eat small doses of the honey regularly to improve immunity, treat hypertension and lower risk of diabetes. Quite a progressive-thinking people, it would seem!

But is there any substance to these beliefs? If you’re not in it for the psychoactive properties of this honey, is it worth eating some for the supposed medicinal benefits?

Unfortunately, there is very little peer-reviewed research to support those claims. As usual, studies have focused on the negative reactions of people to eating this honey, rather than any potential positive effects. One 2009 study, published in the Annals of Emergency Medicine, concluded that “a mad honey therapeutic misadventure may be the cause rather than a primary cardiac, neurologic or metabolic disorder.” Not exactly ringing praise.

On that note, however, there may be something to the health claims when we read between the lines. As we’ve discussed in plenty of other Alternative Daily articles, your everyday non-toxic honey is certainly good for healthy digestion and robust immune function. So, why shouldn’t Himalayan honey be good for your immunity as well? And as for the reports of villagers using the honey to treat hypertension, this 2010 study found that eating large doses of “mad honey” can result in hypotension (low blood pressure) — the opposite of hypertension (high blood pressure). Therefore, it stands to reason that eating small amounts of this honey may help to lower elevated blood pressure and thereby “treat” hypertension.

What about sexual performance?

As for sexual performance, which perhaps explains why this honey fetches up to $166 per pound at the black market, there was no mention at all. The only accounts of those who tried using this honey to improve their sex lives saw them being rushed to hospital with dizziness, nausea, vomiting and heart palpitations. It’s unlikely that they managed to get down to business between the sheets with all those side-effects distracting them.

This is all just speculation, of course. It’s probably not enough to risk being rushed to hospital after knocking back a spoonful or two of hallucinogenic Himalayan honey. Perhaps wait a few more years. Cross your fingers that more scientists will take an interest in this curious natural product. Who knows, it may eventually become the next new superfood.

Have you tried hallucinogenic Himalayan honey or something like it? Was your experience a crazy one, an enjoyable one or a hospitalizing one? We’d love to hear your stories!