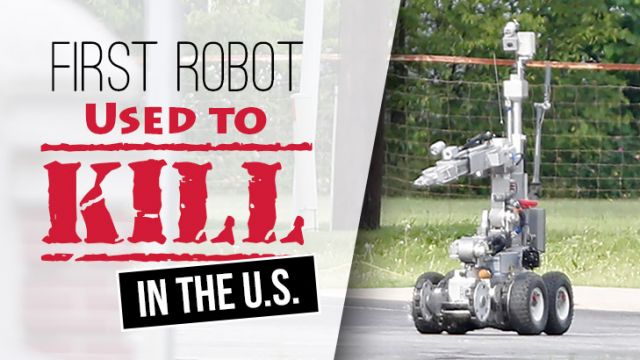 Remote control robots have been used by the U.S. military since the war of Afghanistan to defuse explosive devices. U.S. law enforcement also uses robots to investigate suspicious packages and cargo. Last week, for the first time, law enforcement in Dallas used a robot to deliver an explosive device that ultimately killed a suspected sniper.

After five police officers were shot dead, Dallas law enforcement did what they thought was the only solution to avoid further deaths — they sent in a “bomb robot” to kill the suspect.

In a press conference reported by CNN, Dallas police Chief David Brown defended the situation by saying, “other options would have exposed our officers to grave danger.”

Robots joining police forces come from a U.S. Department of Defense program transferring surplus equipment from the military according to Phys.Org. Although not technically used to kill, these robots were initially built to save lives. But creating a “killerbot” is new territory for the U.S. police force.

Arming a robot with a bomb obviously raises several ethical questions regarding policing and militarization and the use of technology as a crime-fighting weapon. Why not use a robot armed with non-lethal gas to subdue a suspect; was a bomb absolutely necessary?

Supporters say yes. In last week’s sniper attack that saw five officers killed, the robot may have been the only solution for ending a hostile situation, whereby other police officers or civilians could have been hurt. But are these robots setting a precedence for militarizing the police force? Now that we’ve crossed that line between policing and warfare, can we ever go back?