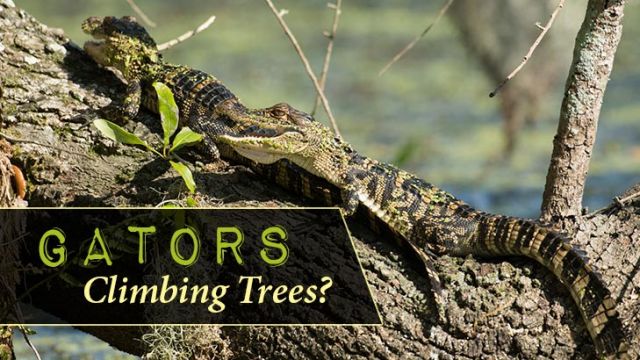 As if we don’t have enough to worry about. Now apparently alligators climb trees, according to a South Florida man who spotted what he originally thought was a large lizard. He soon discovered it was 5-foot gator.

After living in Southwest Florida for eight years, Ronald Saracino of Cape Coral was shocked at what he found lounging in a tree near Viscaya Parkway and 9th Lane. “Saw something in a tree, at first I thought maybe it was a lizard,” Saracino told Wink News. “The more I looked at it, the more I thought it was actually probably a 5-foot gator,” Saracino said.

“I know people are not going to believe it,” he added. “But I 100 percent believe it was a gator!”

Years ago, after my father purchased a piece of land on the Halifax River in Daytona Beach, we were shocked to discover that fences couldn’t keep the gators away. Apparently, female gators were climbing the fence and using the secured area to lay their eggs.

Amy Sera, an educator at the Calusa Nature Center in Fort Myers told Wink News, “they are more agile than people give them credit for.” And it is common for gators to climb things, such as fences, if they need to.

It seems alligators ring doorbells now too. Danielle Barkley captured a video of a gator climbing the front porch of a Moncks Corner home in South Carolina. What happened next is laughable and a little scary, to say the least, for anyone answering the door.

Video shows the gator lifting itself to ring the doorbell while peering into the window. Luckily, no one was home at the time. Ding dong – guess who?