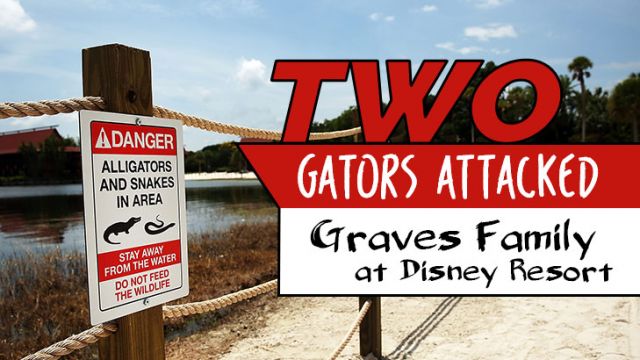 One month after the deadly gator attack that took the life of toddler Lane Graves at a Disney resort hotel, we now learn that two alligators were involved. Matt Graves, the toddler’s father, fought a second gator while trying to rescue his son.

Second gator on the loose

As two-year-old Lane Graves was being pulled into the lagoon at the Grand Floridian Resort at Walt Disney World, his father was attacked by a second gator as he tried to free his son on June 16. Matt Graves refused to leave the spot where Lane disappeared, according to an email obtained by The Orlando Sentinel.

Capt. Tom Wellons with the Reedy Creek Fire Department emailed two supervisors about his dealings with the toddler’s father, Matt Graves, the morning after Lane Graves went missing, according to recently released public records. While examining the distraught father, Wellons told Graves that he needed stitches and antibiotics for the lacerations from the second gator’s teeth.

Wellons said in the email that Graves “refused to leave” the area, but he was finally able to persuade him, by telling him he come back once medical treatment was administered.

“This incredibly sweet couple insisted on showing us pictures of their happy son,” Wellons wrote in the email. “The mom kept referring to him as her happy boy.”

It was on the way to the hospital that Graves shared “the horror that he experienced,” said Wellons in the email. As the toddler was being pulled into the water, a second gator attacked the father while he tried desperately to reach his son. The email was forwarded to Orange County officials, reports The Orlando Sentinel, to alert them that there may be a second alligator on the loose.

While alligator attacks are rare, they can be deadly. In total, five alligators were caught and killed in the 16-hour search for little Lane. His body was later discovered intact 15 yards from the shore and six feet underwater.

The Orange County Sheriff’s Office detailed in the email that the family was relaxing by the shore of the Seven Seas Lagoon at the resort, as Lane splashed along the shoreline. While there were signs posted in the area advising against swimming, no signs warned of gators.

This was a horrific accident that could have happened to any family. A Massachusetts mother of three recently shared photos of her son playing in the same spot that Lane Graves was killed. Jennifer Venditti Roye was vacationing at Disney World with her son Channing at the same time that Lane was killed by the alligator.

The mom has posted her pictures with People in an attempt to stop the criticism of Lane’s parents online. To date, her Facebook message has been shared over 150,000 times.

There are an estimated 1.3 million wild alligators, or about one for every 15 residents in Florida, according to the Florida Fish and Wildlife Conservation Commission. They are confident that they have caught the alligator the killed Lane Graves, but that doesn’t change the equation when it comes to wild animals and human contact.