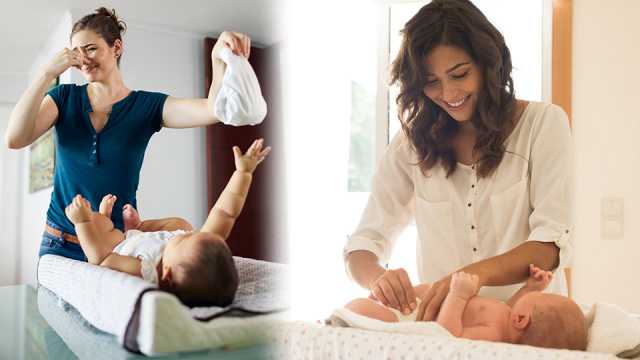 Diaper changing is simply a fact of life when you’re a new parent. And more often than not, it’s a dirty, smelly, noisy affair involving a certain lack of enthusiasm from both parties and a long time spent afterward making it up to the ruffled little tyke. If your baby is anything like mine, he or she probably wouldn’t put diaper changes on their list of favorite activities.

And neither would the average parent, as it happens. But there’s a lot more than diaper changes than meets the eye… or the nose. As with everything in life, the activity is what you make it: going into a dirty diaper change with a negative attitude or feeling of reluctance only makes the experience an unenjoyable one. It’s a self-fulfilling prophecy.

But approaching that next dirty diaper change with a positive outlook can make all the difference to you and your baby. This is all the more important considering what we now know about the influence mom and dad’s emotions have on their baby. In a 2014 study published in the Journal of Psychological Science, researchers showed that babies are not only finely tuned to their mother’s stress levels, they also exhibit psychological changes in their own brain that mimic that of their mother’s.

So how do you change a dirty diaper and still maintain that all-important cheery demeanor? It’s quite simple, really: mindfulness! Here’s how I mindfully mastered my thoughts and emotions during dirty diaper changes to make it infinitely more enjoyable for both myself and my little bundle of cuteness.

Connect with your baby

Begin the next diaper change by taking a moment to connect with your baby. Pick her up and hold her to you, align your breathing with hers and look into her eyes. Allow certainty and love to radiate out from you and into your baby. She should calm right down, or at least know that the world isn’t about to end! That is, of course, provided she hasn’t had something of an explosion down below. If so, you might have to skip this step, for the sake of your clothing.

After you’ve connected with your baby but before you put her down, look at her and announce something along the lines of “we’re going to change your diaper now.” While it might not seem like it, especially with the younger ones, babies respond to our talk and by saying this each time, you’ll be taking away the uncertainty and unpleasant surprise of the diaper change.

It might seem a little counterintuitive, but you’re going to want to take your time with this diaper change. It’s time well spent with your little one, enabling you to connect with her on a deeper level and get some serious one-on-one time… even if there’s a strong odor rising up from her nether regions.

With this in mind, find the warmest, most pleasant spot you have in your house. If you’re on the go, this might not always be possible, but generally speaking most diaper changes take place in the home. The more pleasant the spot, the less your baby is going to complain about the whole process, allowing you to move slowly but surely and maintain that mindful awareness.

Link your awareness to your baby’s

Once you lie your baby down, make contact with her once more — this could be simply placing your palm on her stomach or her shoulder. Now it’s time to really fine-tune that state of mindful awareness. Focus on your breathing first, paying close attention to the flow in and out of your lungs, then begin nurturing positive thoughts in your mind.

Think about how much you love your little one, how you’re not judging them for whatever little surprise you might find in their diaper, how it’s great that they’re “going through the motions” (better out than in, right?), and how you’re both going to be so much closer together after you’re done. Focus on the many ways in which you’re connected with your baby — through touch, eye contact and your shared breathing. Perhaps even the shared understanding that you’re going to remove that squidgy stuff from her diaper and in return she’ll feel fresh and new again. It’s a match made in heaven, really!

This is perhaps the most important part of the process; to rush is to lose that sense of calm purpose and the connection you’ve worked so hard to establish between the two of you. This is why it’s so important to find a warm, comfortable spot to do the changing, so your baby isn’t shocked by a cold rush of air on the region in question, and they’re soothed by the pleasant, unstimulating surroundings.

Move slowly but surely, keeping your mind firmly planted in the now and maintaining a positive outlook. You’ll find that the task will be over sooner than you expected, as you’ll move with more certainty and be less likely to make a time-consuming mistake.

Congratulate your baby on a job well done!

Because most parents really don’t savor the task at hand, their baby eventually gets the impression that they’ve done something wrong. I didn’t realize this until I started practicing mindful diaper changing — I was approaching the changes with a sort of resigned “let’s get this over with ASAP” sort of determination, and found I had been wearing a grim expression every time. It’s not like you’re being trucked off to war, people!

Once I realized this, I also realized that my baby may have been getting the subliminal impression that she was getting punished for something. Guiltily, I banished the grim expression and made a point of congratulating my little one on a job well done each time — every poop and pee is really a mark of everything you’re doing right! It’s a sign that your baby is getting enough food from you to actually produce surplus waste, which means they’re getting sufficient sustenance to put on healthy weight.

Let your baby know that the change is over

Babies like to know what’s going on. Telling them, “Okay, we’re all done!” signifies the end of this particular task and keeps them in the loop. It also shows them what to expect next time a diaper change looms on the horizon.

Now take some time to simply hold your baby and send her loving thoughts. It’s a pleasant way to end what might have otherwise been a very unpleasant experience.