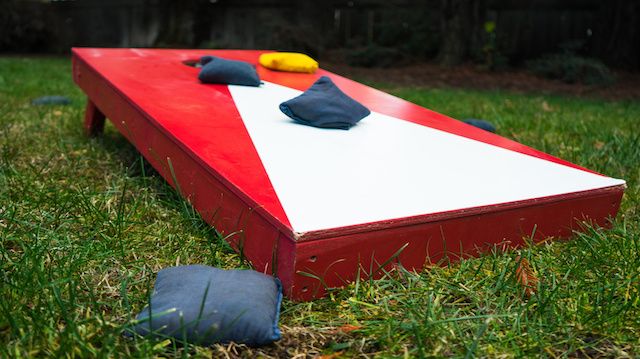 The game reputedly started in Germany back in the 1300s and somehow re-emerged in Kentucky in the early part of the twentieth century. If you’re familiar with playing horseshoes, you’ll pick up cornhole rules right away. All you need to get started are two cornhole platforms — wooden boxes with a hole in the middle — and cornhole bags.

Cornhole is what this game is called in the Midwest, but denizens of other parts of the country might know it as:

Cornhole is exceptionally safe. The bags have no sharp edges, and they’re very soft. That makes it an ideal family game that even the littlest kids can play. Unlike horseshoes, which require a sand pit and are heavy — and even dangerous — for youngsters, cornhole is playable anywhere. While it’s classically played on a lawn, driveways, beaches and even basements make fine cornhole playing grounds.

Cornhole boxes and bags easily fit into the trunk of virtually any automobile, so they’re great to bring along to outdoor social occasions. You can purchase fold-down models that increase portability. Having a cornhole setup on hand is also a great way to introduce the activity to the uninitiated.

Cornhole is best played with two or four players. Here are the basic rules:

Toss a coin or otherwise decide who goes first. You and your opponent then take turns throwing bags. Don’t let your feet go past the front of your board. If you do, that’s a foul, punishable by getting hit with cornhole bags. None of the tossed bags must touch the ground. If one does but then bounces onto the board, remove it immediately before the next bag is thrown. When all the bags are tossed to the other side, add up the score. The highest-scoring team goes first in the next round.

Each bag on the board is worth one point, with a bag entering the hole worth three points. An equal score cancels each other out, so the team throwing first in the prior round throws first again. The first team to reach 21 points wins the game, as long as there is a two-point lead. A match is won when a team wins two games. While that’s the official way of keeping score, casual players often make up different scoring rules, often based on the age of the players. Small children may not have the patience for long matches.

The American Cornhole Association (ACA) offers ranking levels in singles, doubles, seniors, juniors, women’s and — believe it or not — professional play. Participants can vie for state, national and world championships. This year’s world championship competition takes place over five days, from July 26 to 30, at the Knoxville Convention Center in Knoxville, Tennessee. The event has appeared on ESPN. Better yet, it’s free for spectators, if you want to see cornhole at its best.

The ACA states, “Just a short time ago, the sound of bag meeting board was barely heard. Now it is a drumbeat across the nation.” Summer is almost here — a perfect time to pick up that drumbeat. Incorporate some cornhole into your Memorial Day, Fourth of July or Labor Day festivities. Who knows — perhaps you’ll end up throwing bags in the world championships some day.