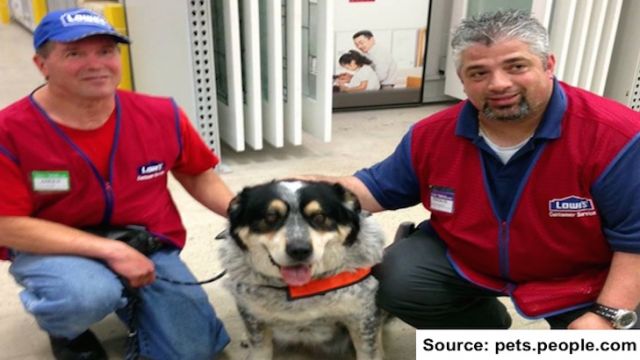 A Canadian Lowe’s store hired a man who wanted to work but needed a service dog to help him. Now, Owen Lima and his dog Blue are part of the team at this home improvement giant. In fact, they are the official front-door greeters at this Lowe’s in North Regina, Saskatchewan.

Lima suffers from a brain injury that causes some anxiety issues and makes it difficult for him to understand people who speak fast. Blue helps him keep calm and allows Lima to do his job.

Lima had a hard time finding work because of his disabilities and his need for a service dog. He’s been looking for steady work for the past 10 years. His brain injury occurred 40 years ago. Lowe’s manager Paolo Gallo didn’t think twice about hiring the pair, once Lima explained why the dog was at the interview. Lima cried tears of joy when he was hired. Now, Lima and Blue wear matching Lowe’s vests as part of their job, and Lima has a new lease on life.

You’ve heard of guide dogs for the blind. Some service dogs are different — they aid people whose disabilities aren’t always obvious. Under the Americans with Disabilities Act (ADA), a service dog is defined as “any guide dog, signal dog, or other animal individually trained to provide assistance to an individual with a disability.” As long as they meet the definition, they are considered service animals under ADA regulations, whether or not they have received certification or licensing by any government agency. These animals are not considered pets. Genuine service dogs are quite expensive, and organizations training such dogs often have a long waiting list.

“No pets” prohibitions in housing or transportation do not apply to service animals.

Service animals in places of business

Under federal law, service animals are permitted in private places of business — restaurants, hotels, retail stores and theaters — wherever customers are generally allowed. Businesses can’t discriminate against people with service animals or segregate them from other customers, nor can they ask to see proof of the owner’s disability. A business representative can ask if the animal is a service dog, and about the assistance the animal provides.

The primary exception to this law is when a service animal appears vicious, and/or “proposes a direct threat to the health or safety of others.” Businesses can insist that the animal is leashed or otherwise restrained while on the premises.

Because the definition of service animal is vague and certification isn’t required, there are plenty of people who simply want to bring Fido into a place he’s normally not allowed by calling him a service dog. These individuals might purchase a vest for their pet and — voila! — he’s suddenly permitted in the bars, restaurants and shops they frequent, and can fly in the airplane cabin rather than in cargo. Some may buy fake service dog certification from unscrupulous purveyors online. Unfortunately, what these folks don’t realize is that they’re committing a federal offense. The odds are that people claiming phony service dogs won’t be arrested, but if their dog behaves badly, it reflects poorly on genuine service dogs to those witnessing the event.

For people like Owen Lima, a service dog allows them to lead a more fulfilling, independent life. It’s gratifying that a major chain like Lowe’s recognizes that just because someone needs a service dog, it doesn’t mean they won’t make a good employee. Perhaps more businesses in North America will realize people with disabilities can contribute to the workplace, with or without a four-legged companion.