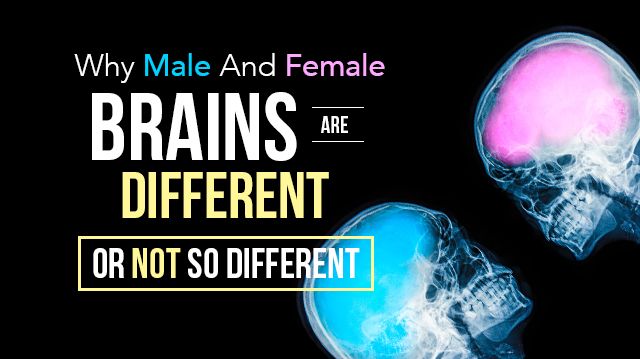 He said, she said — we all have our opinions on the female and male brain. But are they really that different? Some studies say yes and others say no. Check out the top reasons why some experts believe male and female brains are different, and others not so much.

In 2013, a Penn Medicine brain connectivity study found noticeable differences in the neural wiring of men and women that theoretically gave credibility to some preconceived beliefs about male and female behavior. Not surprisingly, the study created controversy.

Research published in the Proceedings of the National Academy of Sciences analyzed the brain scans of approximately 1,000 males and females, ages eight to 22 years. Researchers found some remarkable differences. While male brains seem to be wired from front to back, with some connections bridging the two hemispheres, in females the pathways criss-crossed between the left and right.

Study participants were then asked to perform a series of cognitive tests. The results appeared to support this theory. Men scored better on spatial processing and sensorimotor speed. Women scored better on attention, word and face memory, and social cognition.

Regardless, some experts question whether it’s really that simple, since brain connections are not set and can change throughout life. Still, other experts strongly believe male and female brains are strikingly different.

Gray matter — the dark tissue that contains the core of nerve cells — consists of specific action-processing centers in specific areas of the brain. This can translate to men having tunnel vision when they are deeply engrossed in a task, making them less sensitive to other people or their surroundings.

On the other hand, white matter (the bundles of nerve fibers that transmit signals) connects the brain’s gray matter and other processing centers together. The gray-white matter difference in women’s brains may be the reason why adult females are so good at multitasking.

While both male and female brains produce neurochemicals such as serotonin, testosterone, estrogen and oxytocin, each gender processes them differently. Because of how each gender processes these chemicals, males tend to be more impulsive and aggressive than females. This is why men require different strategies for releasing stress, suggests Jantz.

Meanwhile, the higher levels of estrogen in a woman’s brain shifts her toward a preference for avoiding conflict, and increases her ability to feel gut sensations more than men.

Jantz is quick to point out that although there are differences between male and female brains, scientists have discovered exceptions to every so-called gender rule. Some males may be very sensitive, and some females not so much. As with all gender differences, no one way of doing things is better or worse, and it is important to remember that all differences have advantages and disadvantages.

Maybe we’re not that different after all

While researchers have identified several structural differences between the brains of men and women, a new study led by Daphna Joel at Tel Aviv University suggests that there might not be such a big difference between male and female brains. Obviously, this is a hot topic since as a society we tend to assume that humans belong in two distinct groups.

By using existing sets of MRI brain images, researchers measured the volume of gray matter and white matter in the brains of more than 1,400 participants. They also studied data from diffusion tensor imaging, which indicates how white matter extends throughout the brain, connecting different regions. While research suggested that it is impossible to tell the sex of an individual based solely on MRI images of the brain, researchers did find some structural differences between men and women.

For instance, the left hippocampus, an area of the brain associated with memory, was typically larger in men than in women. But some MRI results showed a significant overlap between males and females. Some female brains had a larger or more male-typical left hippocampus, while some men had a smaller than average hippocampus.

To accommodate the overlap in male and female brains, researchers created a range of “maleness to femaleness” for the entire brain. Then the team scored each brain, region by region, to find out where they fell on that male-to-female range.

The message was loud and clear. Although there are marked sex/gender differences in the male and female brains, they should not be categorized into two distinct classes: male brain or female brain.