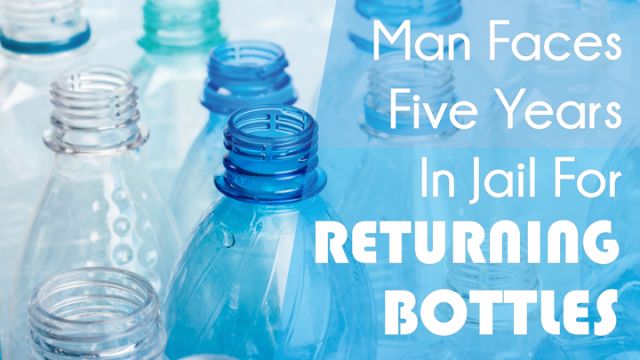 Similar to a Seinfeld episode, a Michigan man attempts to bring in a truckload of empty bottles from out of state to cash in on the refund, which is double in Michigan. Unlike Seinfeld, the man charged could face up to five years in prison.

Last April a Michigan trooper pulled over a man speeding in a rented truck about 40 miles northwest of Detroit. The trooper soon discovered that the driver was carrying thousands of empty bottles into Michigan from another state.

“I don’t think you could have put another five or 10 cans in here,” Lyden said. “It was packed.”

In 2008, state lawmakers amended Michigan’s bottle-deposit law to prevent people from bringing bottles from out of state to return in Michigan for 10 cents a piece, which is the highest bottle deposit in the country. But it’s illegal for stores to knowingly accept out-of-state bottles. In addition, manufacturers were made to put a special mark on returnable cans and bottles sold in Michigan.

The prosecutor, William J Vailliencourt for Livingston County said his office “has never had a case like this.”

A scheme right out of Seinfeld

There may never have been a case like this, but we have seen a scheme like this plotted on an episode of Seinfeld, titled “The Bottle Deposit.” In that episode, Kramer and Newman hatched a scheme to return a truckload of empty bottles to Michigan where they could collect a 10-cent refund, versus collecting only 5 cents per bottle from their home state.

The scheme to return bottles purchased outside of Michigan to capitalize on the refund may seem feasible, but in reality it’s illegal under the state’s bottle deposit law. And Brian Everidge, the man who is accused of attempting to “return” more than 10,000 bottles collected from other states, may face up to five years in prison for one felony count of beverage return of non-refundable bottles reports the Guardian.