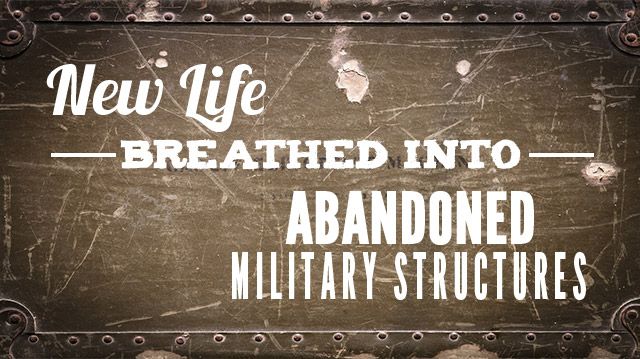 Something old is new again when old military structures are transformed into sustainable architecture. Once a poignant reminder of our turbulent past, today these military bunkers and bomb shelters have new life breathed into them as climbing walls, water parks, palatial homes, nightclubs and even an aquarium.

The homes and buildings where we live, work and play protect us from the extremes of nature. Yet those same buildings affect our health and environment in many ways. New builds consume a significant amount of energy and natural resources, so it goes without saying that any buildings that were built to last, like abandoned military structures, are worth preserving for the sake of our environment.

From flak tower to climbing wall

Constructed in Germany and Austria on Adolf Hitler’s orders during World War II, Flak towers were exceptionally strong structures built to counter airborne Allied forces. After the Nazi defeat, some of these flak towers were destroyed, according to Urban Ghosts. But since the massive structures were so difficult to disassemble, many remained abandoned for decades as dismal reminders of World War ll. Today, however, these structures serve a more positive purpose — as sustainable architecture.

From airship hangar to water park

From the outside it looks like one massive airship hangar, but inside it’s home to pools, sandy beaches, balmy lagoons, a vertigo-inducing waterslide and a massive indoor rainforest. The world’s largest freestanding building is an airship hangar built at an abandoned Soviet military base south of Berlin. It measures 1,181 feet long and 688 feet wide. The structure, created for the delivery of giant industrial machinery like wind turbines, was converted by a Malaysian firm and turned into Europe’s biggest water park.

From Russian bunker to nightclub

Bunker 42, located 184 feet underground, sits in central Moscow, near the Kremlin. The bunker, built in 1956 is 75,000 square feet underground, near the Taganskaya subway station. The command point was in use from 1950 to the mid-1980s and at one time had enough room for 3,000 people to live and work for 90 days. Today, the bunker is home to a cool restaurant and nightclub after developers transformed the massive structure into a museum, restaurant, spa and club.

From torpedo facility to lavish home

A 1955 abandoned military torpedo facility, once used to test submarine technology during the Cold War, is now a residential home worth over four million euros. Before being converted into a residential home, the structure included a 160-foot-diameter dome that covered a 120-foot-long and 15-foot-deep pool used for model torpedoes and submarines. The domed structure has since been removed, but the home still features a four-foot-thick blast wall, Urban Ghosts says.

From air-raid shelter to luxury apartments

A nineteenth-century gasometer that doubled as an air-raid shelter during World War II is now a luxury apartment building known as the Fichte-Bunker. The gasometer held gas for Berlin’s street lamps but was abandoned once the city switched to electricity in the 1920s. The walls were reinforced with up to three meters of concrete for use as a shelter.  And apparently, 30,000 people took refuge there during strategic bombings on February 3, 1945, even though it was only meant to hold 6,000 people. Today the historic air shelter holds 13 two-story luxury condos with substantial grassy upper-level terraces.

From nuclear shelter to hotel

Your idea of luxury may not include sleeping in a nuclear fallout shelter, but for some, it was a  blast. The Null  Stern, which means “zero star” in German, was located in Teufen, Switzerland, and conceived as an art installation. It was briefly functional before turning into a museum in 2010. Apparently, guests paid approximately nine dollars per night to stay there and were given hot water bottles to warm their beds and earplugs to block out the noise from the ventilation system. The rooms were sparse with military-style bunks, and guests entered a draw to see who would get (I presume) the only hot shower in the morning.

From British fort to luxury resort

Abandoned British sea forts have been adapted for many uses. But one in particular has been transformed into a luxury sea hotel. The Spitbank Fort Hotel, repurposed from a 100-plus-year-old fort, which was decommissioned in 1982, is now a luxury island resort. At 565 dollars per night, the hotel features fortress windows and cannons. Visitors can only get there by boat or helicopter, but once they arrive, they’re greeted with a champagne bar, wine cellar, library, rooftop hot tub, sauna and sundeck.

When abandoned military structures transform into modern-day designs, the result is sustainable living that allows us to remember, heal and move on, but never forget.