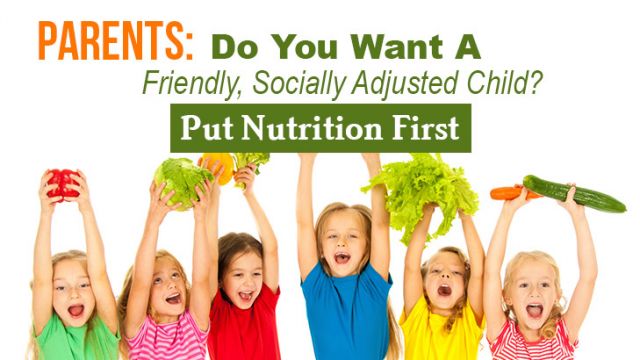 Parents: we all know that making sure our children get good nutrition as early as possible sets them up for a healthy life. After all, the eating habits we get accustomed to in childhood set a foundation for how we’ll likely eat as adults. It goes without saying, the healthier the better, the earlier the better.

However, aside from the obvious focus on the relationship between healthy eating and physical health, there is now evidence that receiving proper nutrition at an early age can also positively affect social development.

To arrive at this conclusion, Liu and her colleagues analyzed approximately 1,700 children from Mauritius, an island off Africa’s southeast coast. The children were all three years of age, and the analysis included the children’s intake of iron, two B vitamins (vitamin B2 and niacin), and protein. If children were deficient in any of these nutrients, they were categorized as “suffering from nutritional deficits.”

The researchers also analyzed various types of social interactions in the children. These included how friendly they were, their “active social play,” how much they explored their environment, and how well they verbalized. Results of the analysis showed that proper nutrition was associated with more developed social behaviors. The study also found that eight years later the children who had received proper nutrition had higher IQs.

“The bigger message is give children good nutrition early on. Not only will it enhance cognitive function but, importantly, promote good social behavior.”

Liu and her colleagues said that they are interested in studying children in large United States cities for a correlation between nutrition and social behavior. While more research needs to be done, it’s an association well worth noting, especially for parents.

How to get kids to eat healthier

So, what to do if your little one is a picky eater? Here are a few tips to try:

What other ways do you get your kids to eat healthy?