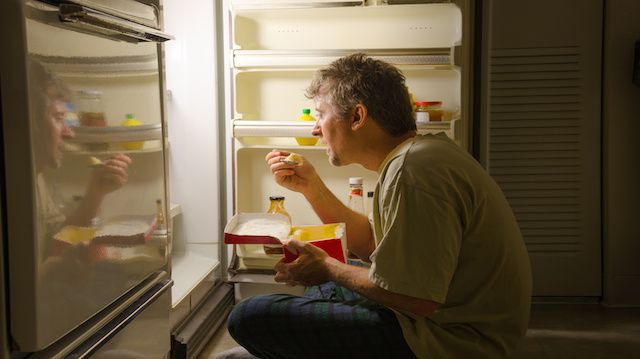 Imagine this scenario: You’re tired and groggy after not getting enough sleep. Oddly enough, you find yourself extremely hungry, even though you ate lunch just a short while ago.

You drag yourself to the fridge. None of the healthy options seem to sound good. Apples? Nope. Carrots and almond butter? Pass. Although you know it’s entirely unhealthy, you end up going for a bag of processed chips or a snack cake.

Has this happened to you? It’s probably happened to most of us at least once. However, if you’re regularly not hitting the seven-hour mark for a good night’s sleep, chances are it happens a lot more frequently.

A new study, recently performed by researchers at the University of Chicago Medical Center and published in the journal SLEEP, has linked insufficient sleep with a higher likelihood of overeating and snacking on unhealthy foods.

While researchers have long known that there is a connection between sleep deprivation and weight gain, the University of Chicago team wanted to find out exactly how these mechanisms worked. What they found was interesting, indeed.

Erin Hanlon, an endocrinology, diabetes and metabolism research associate, explained, “We found that sleep restriction boosts a signal that may increase the hedonic aspect of food intake, the pleasure and satisfaction gained from eating. Sleep restriction seems to augment the endocannabinoid system, the same system targeted by the active ingredient of marijuana, to enhance the desire for food intake.”

In essence, not getting enough sleep may simulate the type of “munchies” experienced by marijuana users.

For their experiment, Hanlon and her fellow researchers recruited 14 volunteers, all healthy men and women in their 20s. For four days, the volunteers stayed at the University of Chicago’s Clinical Research Center and slept an average of 7.5 hours per night. For the next four days, the volunteers slept only an average of 4.2 hours. Each day, the study participants were fed three meals per day.

When a variety of snack options was presented to the volunteers after their fourth night of sleep deprivation, the tired volunteers chose foods with 50 percent more calories and twice as much fat as the foods they chose when they had slept normally.

On these results, Hanlon summarized, “If you have a Snickers bar, and you’ve had enough sleep, you can control your natural response. But if you’re sleep deprived, your hedonic drive for certain foods gets stronger, and your ability to resist them may be impaired. So you are more likely to eat it. Do that again and again, and you pack on the pounds.”

Getting a good night’s sleep on a consistent basis is important for many reasons, including but not limited to a healthy waistline. However, many of us struggle with getting enough Z’s.

Step one to fixing this is to develop a healthy sleep schedule. Make sure that the time you are going to bed will give you at least seven hours of sleep by the time you need to wake up. For many people, eight hours is preferable. If you’ve been coming up short, try going to bed an hour earlier.

Remember, don’t overschedule yourself, especially in the evenings. If you’re sleepy and stressed, you likely will not be doing your best work anyway.

Taking steps to curb your stress is another big way to improve sleep quality. Kelee meditation, yoga and deep breathing can all help a lot. Exercising in the early afternoon can also work wonders.

On top of that, try these sleep-promoting bedtime beverages or a cup of soothing tea. You could also indulge in a massage with some relaxing essential oils and rest easy!