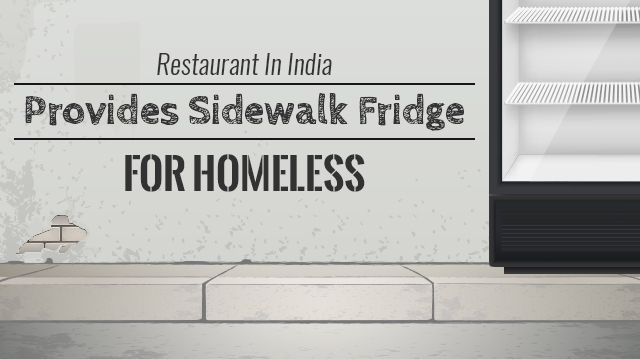 A humble tea cafe in Kerala, India, is setting a bold example for other restaurants and extending a helping hand to the poor and homeless. The establishment, Pappadavada, has installed a refrigerator on the curb in front of the cafe to help those people who are homeless, poor or in need of food.

The refrigerator, which is available to the needy 24 hours a day, seven days a week, has been affectionately labeled by locals as the “Nanma Maram,” meaning “Tree of Goodness.” Pappadavada owner Minu Pauline told reporters she believes that not only will the fridge change the lives of the homeless community in Kerala, it will also teach citizens of the city and elsewhere the importance of not wasting food.

The cafe also issued a message through their Facebook page asking their followers to assist them in stocking the fridge with any spare leftovers or food.

Pappadavada’s gesture is but one of a growing number of charitable acts by businesses and restaurant owners around the world. In the Basque town of Galdakao, Spain, a similar refrigerator has been installed on a street corner. The fridge, which was suggested by former food bank manager Alvaro Saiz and funded by the municipality, is designed to receive food and leftovers from both restaurants and local families, and thereby provide food for the town’s hungry and poor.

Saiz said that the idea of the fridge, now labeled the “Solidarity Fridge,” came to him during the recession when he observed people on the street rifling through trash bins and dumpsters looking for food. He knew that there had to be a better way for restaurants and local residents to provide the homeless with their leftover food without throwing it away.

When Saiz came to the Galdakao city hall with the scheme, Mayor Ibon Uribe was instantly onboard. “I thought it was both crazy and brilliant!” he told reporters. “How could I say no?” The municipality was happy to come up with the $5,500 to fund the refrigerator, however some legal restructuring was needed to permit the installation of the fridge and prevent the city from being sued if people get sick. In order to prevent this, no uncooked meat or eggs are allowed in the fridge, and any food that remains there for more than four days must be trashed.

The four-day time limit really isn’t a problem, though — those who maintain the Solidarity Fridge told reporters that anything placed in the fridge is snapped up within a few hours.

In an entirely different approach to helping those in need, a restaurant in Baltimore, Maryland, last year opened its doors to the homeless during the city’s Restaurant Week in July. Rather than offering a prix fixe menu to food enthusiasts like the rest of the establishments during Restaurant Week, Tabrizi’s opted instead to partner with local shelters and feed those in need.

So from July 20 to 25, the restaurant Tabrizi’s catered only to the homeless, offering free meals to those who could not afford to buy their food. Restaurant owner Michael Tabrizi said that an encounter with a homeless person while stopped at a red light one evening encouraged him to take action. Tabrizi gave the man his business card and told him to visit his restaurant for a free meal. He asked himself how he could do the same service for others in need, and the idea of opening his doors to the homeless during Restaurant Week was born.

Interested in this topic? Find out here how a German website is fighting back against food waste.