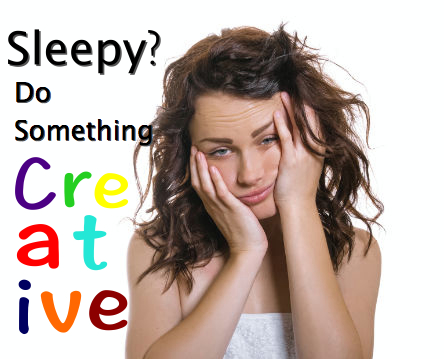 In order to be truly creative, we need to step out of our comfort zones: to color outside the lines, if you will. While this can mean different things for different people—everyone has a certain rhythm to their own creativity—one way to boost yours may be to tackle a creative project when you’re sleepy.

This may seem strange at first, but really think about it. When our minds are gearing towards rest, our thoughts collect in a more free-form fashion. If we harness this free-form thinking, it can open up new ideas, avenues, and methods that we may not have considered in our alert, more logical states of mind.

Plus, there is some science to back up this theory.

In 2011, a study testing the effects of sleepiness on both analytical and creative tasks was performed by researchers at Albion University and published in the journal Thinking and Reasoning. For the study, 428 university students were recruited, and sorted into groups of “morning people,” “night owls,” and “neutral” individuals.

The participants were then given both analytical tasks (involving little creativity) and creative problem-solving activities, at both their preferred time of day, and their least preferred. A four-minute time limit was placed on tasks, and each group’s ability to successfully complete each task at a given time of day was analyzed.

On their results, the study authors wrote the following: 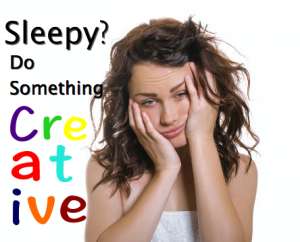 In other words, creative tasks were better performed by night owls in the morning, and by morning people later in the day. This may well be due to the mind’s tendency to wander, and a looser grip on mental boundaries, or, “the box,” during these times.

We’re not saying that one should forsake sleep for creative endeavors—not at all. A good night’s sleep is crucially important to good health. But, if you’re working on a creative project, and are feeling stuck, try doing it during a time of day when you’re not feeling fully awake.

Perhaps try writing, journaling, or sketching an hour before bed, if you’re a morning person. Night people may find their creative fires burning particularly bright in the wee hours—though being awake may not be the most fun at that time!

Creativity is highly individual, and you have to create when and how it works for you. However, if you’re in a rut, try this method—you may get some unexpected, and awesome, results!