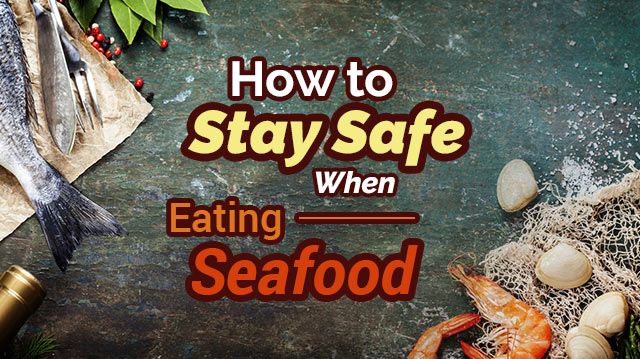 Seafood has been credited with the title “brain food,” as it offers a wide range of health benefits. Although seafood is an excellent source of omega-3, there are some significant risks to take into consideration when consuming seafood.

Rising levels of pollution in the ocean are affecting marine life, as well as human health. According to the organization Save the Sea, death and disease caused by polluted waters cost the global economy $12.8 billion a year — with $7.2 billion spent on the impact of hepatitis from tainted seafood.

Unfortunately, many issues are viewed as “out of sight, out of mind.” However, a growing number of people are shedding light on what’s really going on. From the use of pesticides on crops, which then contaminate the ocean, to the antibiotics given to farmed fish on a daily basis, our seafood is essentially being poisoned.

In general, seafood itself won’t harm you. Of course, there are select cases when individuals suffer from allergic reactions, or accidental consumption of poisonous fish occurs. However, for the most part, health risks associated with seafood are linked to human action and intervention, either from pollution and contamination or from the processing, storage and preparation of seafood.

The following list is not meant to scare you by any means, but it’s important to be aware so you can make informed choices that will safeguard your health. These tips will allow you to reap the benefits of seafood, without the associated health risks.

For starters, when purchasing seafood, you want fresh or frozen fish that obviously hasn’t been doused in batter and fried in hydrogenated vegetable oil — sorry, fish sticks don’t count as a beneficial source of omega-3 fatty acids. When choosing fresh fish, it shouldn’t smell fishy. If you find that the fish looks fairly limp, brown or has a strong smell, avoid it.

Exclusive: Seafood Fraud — Your Salmon May Be Overly “Fishy”

Also, it’s important to buy sustainable, wild-caught fish. There’s plenty of research to show the differences between farmed and wild-caught fish. Farmed fish are fed an unnatural diet, kept in horrendous conditions, and pumped full of hormones and antibiotics. They are also less nutritious — we’ll touch more on this below.

Fish is highly perishable, so it’s critical that you pay attention to how long it can be safely stored. If fish is fresh, you should generally eat it within one to two days, depending on when and where it was sourced. In terms of shellfish, you should find a reputable source.

Some fish contain more mercury than others. At this time, there are four main species of fish to avoid — swordfish, shark, king mackerel and tilefish, sometimes referred to as golden bass or golden snapper.

Notice how these species are all large predators? Once mercury finds its way into lakes, oceans and rivers, it’s gobbled up by a wide range of species. Smaller species are then eaten by larger species, and mercury levels bioaccumulate. It’s also best to avoid bluefin tuna, walleye, marlin and blue crab.

4. Know the do’s and don’ts when pregnant

With pregnancy comes a long list of do’s and don’ts. It’s important to know what your baby needs in terms of nutrition — what you should and shouldn’t eat.

Once again, mercury is a concern, as it’s been shown to affect the brain development of babies. Now, with that being said, a low intake of omega-3 during pregnancy may actually have greater detrimental effects.

One study, involving nearly 12,000 pregnant women, found that babies born to women who ate less than two servings of fish a week did not do as well when tested for intelligence, development and behavior, in comparison to the babies of mothers who ate fish at least twice a week. Avoid species high in mercury, as discussed above, as well as sushi if you’re unaware of what fish is used or where it was sourced.

As mentioned, farmed salmon has received plenty of worrisome publicity. Last year, Costco, which was once sourcing 600,000 pounds of salmon per week from Chilean salmon farms, began sourcing from Norwegian farmers instead — as they have used the lowest levels of antibiotics since the 1970s.

Since 2013, Chile’s coastal waters have experienced bacterial outbreaks, resulting in farmers using 25 percent more antibiotics. Not only are these antibiotics being passed on to you, the consumer, but they’re leading to drug-resistant pathogens that are stronger and more resilient than ever before.

Yes, salmon is most certainly one to look out for, but it’s not the only source of seafood that’s exposed to chemical cocktails. Shrimp are another seafood favorite, which are given commercial pellets, often containing antibiotics. Within one study, 74 percent of the Thai coastal farmers interviewed used antibiotics — with at least 13 different antibiotics being used, some on a daily basis.

Of course, these findings were documented nearly two decades ago, so what now? Well, a 2014 study found that 60 percent of 342 frozen shrimp samples contained a list of bacteria, including the superbug MRSA. Nearly 94 percent of raw shrimp within the United States is farmed in Asian countries, generally in polluted conditions.

It’s been found that these shrimp are typically given antibiotics, including tetracyclines, which are illegal for importation into the United States. When buying farmed shrimp, whether it’s imported or domestic, reach for products that are certified and raised without chemicals and antibiotics. The study found that the best sources were labeled Whole Foods Market Responsibly Farmed, Naturland and Aquaculture Stewardship Council.

6. Don’t be caught off guard by a seafood-borne illness

Although seafood is an excellent part of a healthful diet, food-borne illnesses and outbreaks are a concern. Infections are caused by a wide range of bacteria, parasites and viruses. When determining risk, a number of key factors play a role.

The mode of feeding, harvesting season, the immediate environment and even how the fish is prepared, all need to be taken into account. To reduce your risk, always make sure stored seafood is cold, limiting the potential for pathogens to grow. Also, cook raw seafood to an internal temperature of 145 degrees Fahrenheit, helping to reduce any bacteria or parasites that may be present.

As mentioned, do not let this list scare you — seafood should not be avoided. The consumption of omega-3 fatty acids has been linked to significant health benefits, including positive neurological and cardiovascular effects. Take an extra 30 seconds to read the packaging, becoming more aware of where your food comes from — and if you don’t know what to make for dinner tonight, try this heart-healthy, wine-roasted salmon with asparagus.