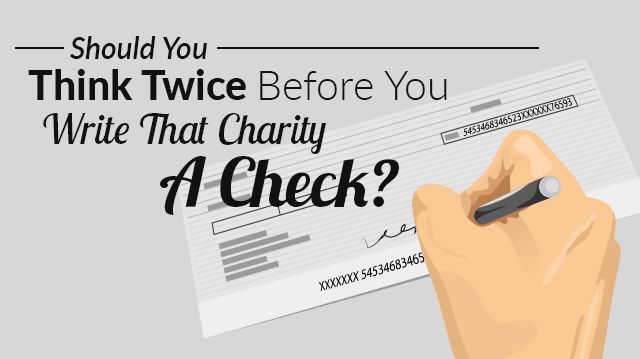 This March, two U.S. charities accused of misusing funds for personal spending were dissolved. Sadly, this isn’t the first time this sort of thing has happened. It begs the question: When you write a check to a charity, do you know how it’s being spent? Luckily there are ways to find out.

Cancer Fund of America and Cancer Support Services, Inc. were shut down after U.S. attorneys general found that $75 million in donations had been spent for things such as memberships to dating sites and Jet Ski outings. According to Yahoo! News, the takedown was the “largest-ever joint enforcement” by state charity regulators and the Federal Trade Commission (FTC).

The leader of both charities, Jim Reynolds, has been banned from managing charities in the future, which is good news for those of us who like to contribute. One less criminal to worry about. Nevertheless, Reynolds and his family managed to amass $187 million from four sham charities, including Cancer Fund of America and Cancer Support Services, Inc. The other two charities — the Children’s Cancer Fund of America and the Breast Cancer Society, Inc.— settled in May of last year and have been shut down for a while.

The tragic part? According to the FTC’s findings, only about 5 percent of donated funds made it to cancer patients and families.

So what’s a giving person to do? How do you know when you cut a check to a charity that it’s going to go to the people who need it? It’s actually pretty simple: Do your research.

The FTC offers a few tips to avoid being taken advantage of by a charity scam. Don’t donate to a charity that:

A quick Google search will yield useful information about specific charities. Another option is to search for organizations via Charity Navigator, an organization dedicated to helping the public make intelligent decisions about giving.

The non-profit, completely independent site was founded in 2001 and since then has developed a database of more than 8,000 of the best-known charities, as well as lesser known organizations that are doing good work in the world. Charity Navigator rates each organization based on two factors: financial health and accountability and transparency. You can search by cause, the “Top 10 ” charities and other categories. How cool is that?

When a charity is dissolved, it’s often discouraging to those of us who try to do some good in the world, but it’s refreshing to know that the federal government takes charity fraud very seriously. It’s also nice to know that organizations like Charity Navigator are out there, connecting people with legitimate and trustworthy charities.

How do you give?