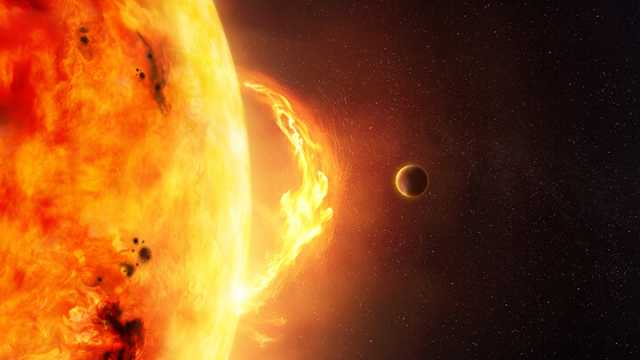 Space is filled with awe-inspiring wonders, but also immense threats that could obliterate life on Earth as we know it. What are the chances of a rogue asteroid smashing into our planet? That’s just one catastrophe that has scientists deeply concerned. Immense solar flares, gamma-ray radiation bursts, supernova explosions from nearby stars and invasion by extraterrestrial life forms are a few of the potential space-based disasters astronomers believe are possible. So, what are seven threats from outer space that could destroy humanity?

Should humanity try and contact alien civilizations? Researchers and space enthusiasts are devising new technologies aimed at broadcasting our existence to potential life forms in other solar systems. These new signaling methods include microelectronic spacecraft containing messages from Earth to laser transmissions beamed to neighboring galaxies.

However, not every astronomer thinks signaling our existence is a wise idea. Lucianne Walkowicz, an astrophysicist at the Adler Planetarium in Chicago, cautions that “There’s a possibility that if we actively message, with the intention of getting the attention of an intelligent civilization, that the civilization we contact would not necessarily have our best interests in mind.”

The cosmologist Stephen Hawking echoes this view. In 2010, Hawking told audiences that “We only have to look at ourselves to see how intelligent life might develop into something we wouldn’t want to meet.”

More specifically, the Cambridge scientist noted that the encounter between old world European explorers and Native Americans “didn’t turn out so well” [for the Indians]. Undoubtedly, Hawking raises the prospect that a far more technologically advanced alien culture might seek to exploit or even destroy humanity.

Nevertheless, many scientists believe letting aliens know we’re here is worth the gamble. According to Douglas Vakoch, director of Messaging Extraterrestrial Intelligence International (METI), “If we don’t tell anyone we’re here, we could miss out on new technology that could help humanity, or even protect us from other, less friendly aliens.” No one knows with certainty how an encounter with an alien species will turn out. They could help us solve our problems or perhaps threaten our existence.

Asteroids are giant hunks of space rock hurtling through our solar system. These humongous boulders have hit the earth before with devastating consequences. After all, cosmologists believe a mammoth asteroid collision with our planet precipitated the extinction of the dinosaurs several eons ago.

Scientists believe the threat from asteroids is serious enough that they’re developing defensive systems to protect our planet. However, extremely large ones may be impossible to deflect or breakup, even with an inter-galactic nuclear weapon. Experts contend that a big enough hit could engender tsunamis, wildfires and other natural disasters that could render much of the earth virtually uninhabitable.

The sun is an immense cauldron of condensed energy. Periodically, it emits tremendous bursts of radiation in the form of solar winds. The earth is protected from the effects of these solar flare-ups by magnetic fields. On occasion, these outbursts are so powerful that their impact is felt on this planet.

For example, in 1859, the effects of a solar storm were evident on earth. The Carrington Event, as the incident is now known, included widespread interference of electrical equipment. Of course, back then the impact of radiation bursts was minimal. Now, however, humanity is a lot more dependent on electronic devices. Scientists speculate that a similar solar storm could knock out communication devices, computers, GPS signaling and power grids. Indeed, every gadget that relies on electricity could be affected. If the solar flare up was big enough, humanity could be thrown into chaos.

China, Russia and the United States are involved in an arms race in space. Likely scenarios for orbital conflict involve kamikaze devices and robot spacecraft that destroy or disable competing satellites. However, scientists warn that a “Star Wars” style conflagration that begins in outer space could trigger a chain reaction that wreaks havoc here on earth.

For example, cosmologists explain that the destruction of just a handful of satellites could start a demolition derby situation as clouds of space shrapnel pose a threat to everything in orbit. As satellites get knocked out or come down cell phone service, GPS signaling and the Internet as we know it would cease to exist.

5. Earth gets devoured by a wandering black hole

Black holes are among the most mysterious phenomenon in existence. They are created when dying stars collapse in on themselves and their incredibly dense mass deforms the fabric of space and time. Consequently, intense gravitational fields surrounding a black hole devour all matter in their vicinity. Not even light, which travels 186,000 miles a second, can escape the whirlpool of destruction emanating from the eye of a black hole.

Many astronomers believe that “recoiling” black holes — which have been ejected from their host galaxies like a rock in a slingshot — are wandering throughout the universe. A very small one could pass through the earth without causing too much trouble, scientists say. But one with as much mass as our moon could create unprecedented problems. Some cosmologists believe our planet would be obliterated, others suggest we’d be brought to the end of time, while still others suggest the earth could wind up in a parallel universe. Black holes are as much an undiscovered territory as death.

Gamma-ray bursts are intense spurts of radiation focused into a narrow beam. They are created by exploding supernovas or pulsating binary star systems. A gamma-ray burst aimed at the earth could destroy the ozone layer. Such an event is not likely. However, scientists believe they’ve found evidence that the earth was hit by gamma rays in the 8th century.

Humanity, of course, survived that incident. But next time we may not be so lucky. After all, as professor Ralph Neuhauser at the University of Jena notes, “Gamma-ray bursts are very, very explosive and energetic events.” Indeed, the amount of energy emitted is thought to be equal to a billion trillion suns, which is more than enough to fry the earth’s atmosphere.

The danger of a rogue asteroid, comet and planet hitting the earth is enough to keep many scientists up at night. Less well-known, however, is the hazard our planet could face if it passed through an interstellar dust cloud.

This threat was first recognized by the British astronomer William McCrea back in 1975. Essentially, it’s possible that as our solar system hurtles through space that it could pass through gaseous and molecular dust clouds created by the remnants of long-expired stars. This cosmic dust could cause global cooling on a massive scale as sunlight is filtered before reaching the earth. If the cosmic dust cloud was thick enough, then humanity could be plunged into another Ice Age.

Once every 26 million years

Outer space seems a long way off. But intergalactic events have impacted life on earth — both for good and ill — in big ways before. According to astronomers “at least some mass extinctions are caused by influences outside our world.” Indeed, the consensus seems to be that the earth is visited by cosmic catastrophes once every 26 million years.

With that in mind, I asked astronomy professor Irving Robbins, of the College of Staten Island (CUNY), what he thought about the probability that the earth could get hit with a galactic event. Here’s what he had to say:

“Our planet has been hit about every 26 million years by a major asteroid or comet impact with global damage. Currently, we are about one million years overdue for such an impact, which may or may not happen. This is the reason in the last two decades numerous operations on earth have been searching for NEO or Near Earth Objects which would pose a threat to our existence. Since we are very good at orbital calculations, so far, no major threat exists. But, minor ones (wipe out a city on this level) could pop up soon. Hopefully, we will catch real threats early and do something about it. If the target is an asteroid we could have years of planning. But if it’s a comet (and a possible global disaster), we only have a few months. Currently, no defense exist.”