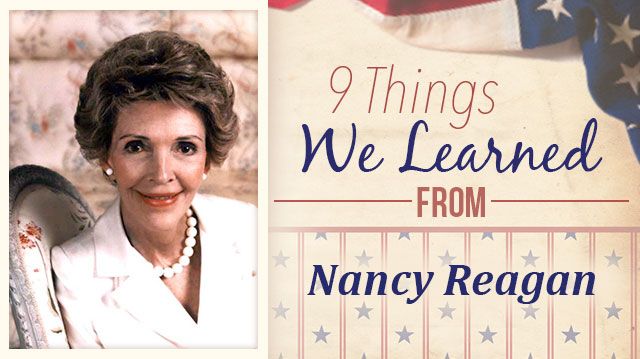 Love her or not, Nancy Reagan was one of the most influential First Ladies in the modern era. She passed away earlier this month on March 6, at the age of 94. She was a dynamic woman, and throughout her life she taught us many valuable lessons.

The real meaning of “stand by your man”

To use New York Times writer Lou Cannon’s words, Mrs. Reagan was a “fierce guardian” of her husband, President Ronald Reagan. In his tribute to the late First Lady, Cannon drew attention to a longtime aide and friend of the Reagans, Michael K. Deaver, who said, “Without Nancy, there would have been no Governor Reagan, no President Reagan.”

Indeed, it was Mrs. Reagan’s support that provided President Reagan with the strength he needed during difficult times. She was directly involved in the hiring and firing of consultants, the 1987 dismissal of White House Chief of Staff Donald Regan and the recovery effort during the Iran-Contra scandal. Yet she always let her husband take the credit for the decisions he made based on her advice.

“Just Say No” to drugs

Although criticized for being too simplistic and ineffectual, Mrs. Reagan’s message to American school kids was clear: “Just Say No.” We learned what it meant when someone was an addict, and we made pledges to stay drug-free. While Mrs. Reagan’s voice wasn’t the only one calling for Americans to say no to drugs during the 1980s, she helped change permissive attitudes toward drug use common in the ’60s and ’70s.

First Ladies are human, too

According to a memoir by Donald Regan, “virtually every major move and decision the Reagans made during my time as White House chief of staff was cleared in advance with a woman in San Francisco who drew up horoscopes to make certain that the planets were in a favorable alignment for the enterprise.”

Nancy Reagan drew criticism for her reliance on that woman in San Francisco — Joan Quigley — but it was all out of her worry for her husband after he was shot by a would-be assassin outside the Washington Hilton in 1981. First Ladies are human, too, it turns out.

Poise and class can get you far

It’s undeniable. Nancy Reagan was one classy lady. Reminiscent of President and Mrs. Kennedy, the Reagans always dressed well — Nancy even bared her arms at formal events from time to time, and she exuded unparalleled elegance. Mrs. Reagan handwrote letters and treated others the way she would like to have been treated. She was once quoted as saying, “The White House belongs to all Americans. It’s supposed to be something we’re proud of.”

On May 8, 2004, Mrs. Reagan stepped onstage at an event for the Juvenile Diabetes Research Foundation in support of stem cell research. Just a few months after her husband’s death, she broke with the GOP in this very public manner to support the research as a way to combat Alzheimer’s disease — from which President Reagan suffered for almost a decade — and other conditions, such as Type 1 diabetes. She publically advocated for the research even as Republican President George W. Bush fought federal funding in the years before President Reagan’s death. She followed her heart and showed others they should, too.

Never be afraid to be a warrior woman

Like most First Ladies, Mrs. Reagan received criticism for even little things, but there were many times that she simply did not care. She lived for her husband and did what she thought was best for him and the country. Just check out some of the things she said throughout the years:

In 1967, Mrs. Reagan said, “I was never a career girl.” Although she went to college and ventured into Hollywood, she really just wanted to raise a family. According to the late First Lady, “Feminism is the ability to choose what you want to do.” And for her, that meant being a wife, mom and supportive First Lady. For Nancy Reagan, being a feminist wasn’t radical; it was just the way things were.

By all accounts, Nancy was crazy for Ronald from the moment they met in 1949. He was a little more hesitant, having been recently divorced from actress Jane Wyman, but the two dated off and on through the fall of 1949 and 1950. They married in 1952 and remained so until his death in 2004. 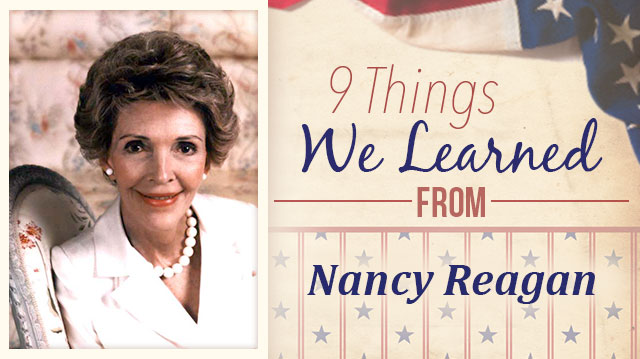 In her memoir, My Turn: The Memoirs of Nancy Reagan, she wrote that her husband “was all I had ever wanted in a man, and more.” The pair were often caught on camera gazing adoringly at one another, and the President once asked, “How do you describe coming into a warm room from out of the cold?” when asked about his feelings for his wife. Theirs was truly a love out of storybooks.

Live life to its fullest

Mrs. Reagan survived her husband for 12 years, so her thoughts on living every moment to its fullest are especially poignant. “There’s a big, wonderful world out there for you,” she once said. “It belongs to you.” Indeed, Mrs. Reagan led an interesting life. She was a Hollywood actress — blacklisted by accident during the Red Scare, which led her to meet her future husband — and served as First Lady of both the state of California and the United States, but through it all, she understood that we’re only here on this earth for a limited time. It’s up to us to make the best of it.

At the news of her passing, President and Mrs. Obama issued a statement that said, “We remain grateful for Nancy Reagan’s life, thankful for her guidance and prayerful that she and her beloved husband are together again.” Indeed, she has left behind a beautiful legacy.

Thanks for all of the great  life lessons Nancy, you will be missed.