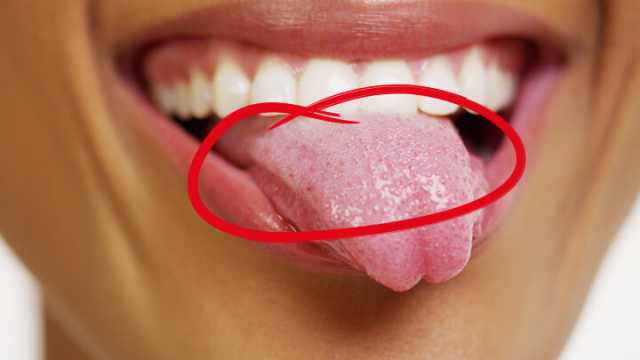 Mmm, nothing sounds more appetizing than tongue scum, now does it? I remember when I was younger, my mom made this picture to go along with a timer. After 30 seconds, the timer would “bing,” letting me know it was time to move onto the next “section” in my mouth. As I moved from left to right, top to bottom, the last area was my tongue.

I remember saying to my mom, that’s not teeth! Like most things, I’m now finding out later in life that my mom really was a superhero. She’s the reason why I am so health-conscious today. Hopefully, I can spread some of that knowledge to you and your family.

So, back to that tongue scum. What is it, and why should we care?

What the heck is tongue scum?

While brushing your teeth, have you ever noticed a whitish film on your tongue? Sometimes it’s yellowish in color, generally coating the back of your tongue. It’s most certainly one of the primary causes of bad breath, but what is it exactly?

Although we use our tongues to talk and taste, this organ also acts as a reservoir. It houses a large number of both living and dying organisms. With that being said, you should have a thin coating on your tongue. If you don’t notice any coating at all, this could mean that your digestive system is not functioning properly.

On the other hand, when there is an overgrowth of papillae (which are little projections on the surface of your tongue), that’s when you begin to notice a slightly thicker coating. Caused by bacteria, dead cells and debris that get caught in these papillae, your tongue film may be trying to tell you something.

After all, as the great John Brown once said, “Symptoms are the body’s mother tongue — signs are in a foreign language.” Once you begin to “listen” to what your body is trying to tell you, then you’ll be able to truly work towards optimal health.

Related: 7 Secret Things Your Tongue Is Trying To Tell You

What is my tongue scum trying to say?

Ha, how ironic — something on your tongue, trying to “tell” you something. Although there are a number of possible causes, the common white tongue scum that many notice begins with inflamed papillae. As they swell, collecting bacteria, this is when you notice a film.

Now, why you’re experiencing inflamed papillae is a little more complex. There is not just one singular cause and effect relationship. More often than not, it’s a symptom of poor health. Some of the most common causes include:

Your tongue is essentially a window into your health. Have you ever noticed when you’ve been sick, that your tongue looks rather, well, sickly? That’s because a range of factors, including color, moisture and texture, can provide clues as to what’s going on inside the body.

Using the tongue to diagnose a possible health complication is common practice in Chinese and alternative medicine. You can tell a lot by this muscular organ. What is your tongue color trying to tell you?

As discussed above, this is fairly common and non-threatening. That is, until you notice heavy white plaque. In this case, you’re likely suffering from a fungal infection. In other cases, this occurs when individuals use too much mouthwash or have been taking too many antibiotics.

Not so much a “film,” but if you notice that your tongue is bright red, this generally means that it’s inflamed. More often than not, this is due to a lack of iron and B-complex vitamins. In contrast, if your tongue is very pale, this could also mean that you’re lacking hemoglobin in your blood, an iron-containing protein.

Once again, if your tongue has a green or yellow coating on it, this is likely due to a fungal infection. This is particularly common among infants. If you notice that you have a green tongue and a sore throat, you may be suffering from an upper respiratory tract infection.

Switching gears for one moment, your breath is also often a sign of poor oral health. Do you notice that your breath is often foul-smelling — even though you brush your teeth regularly? If so, you may be suffering from halitosis, a condition that affects between 15 and 35 percent of adults. Based on its high prevalence, halitosis is the third most common reason why patients see their dentist, behind tooth decay and periodontal disease.

Of these cases, around 90 percent are caused by intraoral issues — including tongue coating. Within one key study, published in Scientific Reports, while studying children with and without halitosis, researchers found that those who suffer from this condition display greater bacterial richness in their tongue coating.

They also noticed that bacterial genes, associated with responses to infectious diseases, were enriched in those with halitosis, but not in healthy subjects. Overall, researchers concluded that subjects with halitosis experience a higher microbial production.

If you’re suffering from halitosis, don’t just reach for antibiotics. Many experts agree that probiotics may be the more beneficial route. As we know, antibiotics wipe out all types of bacteria, both good and bad. Sure, you’ll get rid of the issue — which is sometimes only a short-term solution. And in the meantime, all beneficial colonies will also be destroyed.

Also, bacteria evolve very quickly — which is why we’re experiencing antibiotic resistance. The more a strain is exposed to a certain antibiotic, the more likely it is to build a resistance to that particular drug. Antibiotics do have a place in modern medicine, but not to the degree in which they’ve been so readily dished out.

In comparison, probiotics introduce “healthy” bacteria, reducing colonies of harmful bacteria. Begin to introduce more probiotic-rich foods into your diet — not just for your tongue, but for your overall gut health. Some of the best options include:

When to see your dentist

If you begin to notice any pain or other problematic symptoms in relation to your tongue, then please see your general practitioner or dentist as soon as possible. From an ulcer to symptoms of anemia, there are many possible explanations.

At the end of the day, your tongue is like any other part of your body. It may be trying to give you clues about health — so listen to it. Regardless of your symptoms, whether it’s within your mouth or otherwise, it’s important to take notice. The worst thing you can do is nothing at all.

Tonight during your bedtime routine, stick your tongue out. What do you see? It may be time to give your tongue an ol’ scrub down. Happy brushing!